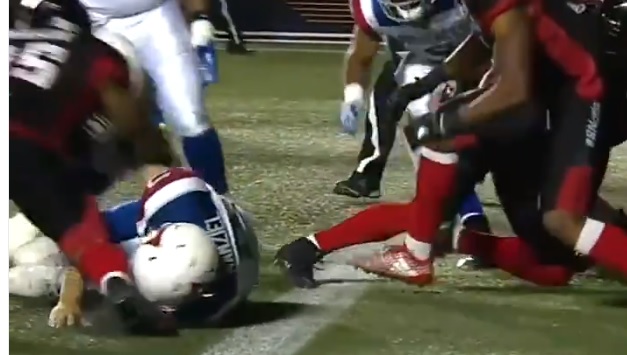 Disgraced former NFL star Johnny Manziel had a rough start in his first game as starter in the CFL when he threw four interceptions in the first half.

In his second game, Manziel got off to a much better start.

Here is Manziel picking up a nice gain early in the game.

Lots of time for @MTLAlouettes QB Johnny Manziel in the pocket, and he finds Ernest Jackson for a nice gain on the play! #CFLGameDay pic.twitter.com/5KaoCe1x8h

Then a few minutes later Johnny was able to throw a touchdown.

Lots of time for @MTLAlouettes QB Johnny Manziel in the pocket, and he finds Ernest Jackson for a nice gain on the play! #CFLGameDay pic.twitter.com/5KaoCe1x8h

Unfortunately, Manziel took a brutal hit to the head later in the game when he tried to run the ball into the endzone.

Johnny Manziel takes a big hit to the head, is clearly woozy, so they rubbed his neck and he missed exactly zero plays. pic.twitter.com/0HyvCIlXyv

Here’s a closer look at the play.

A Johnny Manziel scramble to the endzone ended with this crushing hit and a fumble at the goal line.

Manziel jogged off the field and would return to the game the following possession. pic.twitter.com/vJf6bYtO7W

It appears that Manziel was able to continue playing despite the hit but man he can’t be taking too many more of those.