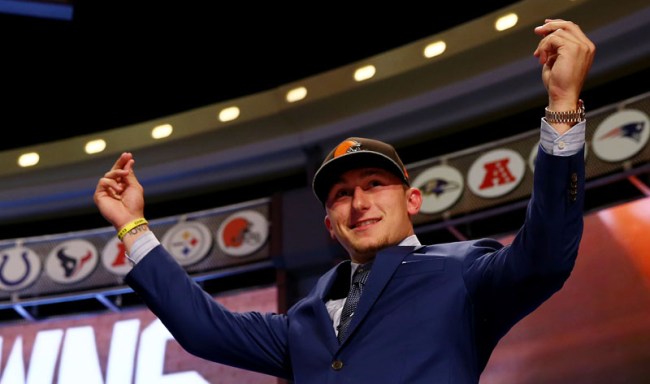 As we reported just prior to the end of 2017, Johnny Manziel has been cleared to become a player in the Canadian Football League (CFL) after initially being rejected. His rights are owned by the Hamilton Tiger-Cats, who announced on Sunday that they had indeed made Manziel an offer and are in discussions with he and his agent.

Considering that Johnny Manziel last played professional football in 2015, threw a whopping 258 passes in his two years as a pro (completing 57 percent), and that pretty much anyone who played with him has said little positive about him, it only makes sense that rather than just accept the CFL’s Hamilton Tiger-Cats’ offer at redemption, he’s making contract demands.

“Despite much speculation and several comments from the Hamilton Tiger-Cats and CFL, Johnny and I have remained silent and continued to focus on his training and preparation. Due to the tremendous support, Johnny wants to let Hamilton fans know where things stand and that he has been working hard in preparation for his comeback.

As context, the CFL maintains an archaic and restrictive rule, whereby their teams can claim an amateur players’ rights, and essentially hold those rights into perpetuity, without any consideration or compensation for the player. The Hamilton Tiger-Cats of the CFL claimed Johnny’s rights when he was a freshman at Texas A&M, and have continued to hold them for over 6 years.

Johnny and I have done our due diligence on the League and team, which has included visiting Hamilton, meeting with CEO Scott Mitchell, as well as multiple meetings and working out for Coach June Jones. All of these interactions have been very positive and served to reinforce Johnny’s excitement for coming out to play for the Tiger Cats. Johnny was pleased to have the opportunity to talk ball with Coach Jones, who has publicly shared his belief that Johnny would be a good fit for the team he’s trying to field.

As Hamilton has announced, and per the aforementioned restrictive rule requirements, they sent us a place-holder contract in order to maintain Johnny’s rights and allow us adequate time to negotiate a deal. During our diligence process and at my request, Hamilton also graciously gave me permission to discuss potential trade options with at least one other club. Johnny and I met with those executives in Texas to discuss their organization and thoughts on Johnny’s market and value around the CFL. However, due to Johnny’s strong relationship with Coach Jones and Hamilton executive Kent Austin, we’ve made the decision to deal exclusively with Hamilton and give them until January 31st to work out a fair deal to make him their Quarterback. So that there will not be any ambiguity in regards to financial expectations, and so the public understands how seriously Johnny is considering this move, I will tell you that we believe ‘fair deal’ means on par with what Hamilton has paid their QB in recent years, despite not having much on-field success. If we cannot reach a deal with Hamilton by this date, we will turn our focus to several other professional options readily available to us.”

They’re going to screw this up, aren’t they? Karma and all that.

I’ll keep grinding and let @ErikBurkhardt work this thing out. I have all the faith in the world in him during this process. One way or another I am getting back on a football field this year. Believe that