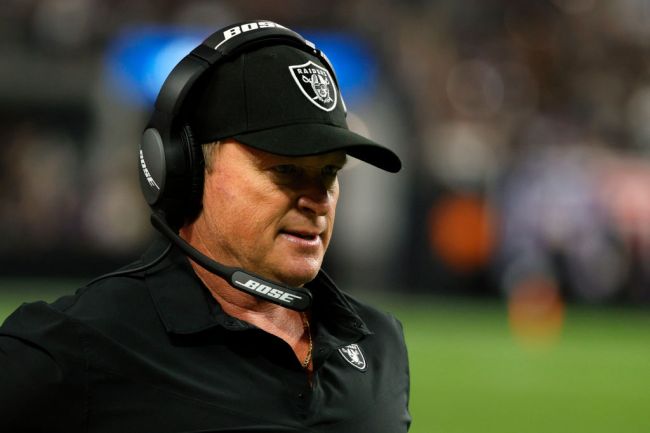 “Dumboriss Smith has lips the size of Michelin tires,”  Gruden said in an email during the 2011 league lockout, according to reports. Gruden was not working in the NFL when the email was sent, as his last year with the Tampa Bay Buccaneers was in 2008. Gruden returned to the NFL as a head coach in 2018 when he took over the Raiders.

The NFL has released a statement regarding Gruden’s racist comment, saying:

“The email from Jon Gruden denigrating DeMaurice Smith is appalling, abhorrent and wholly contrary to the NFL’s values. We condemn the statement and regret any harm that its publication may inflict on Mr. Smith or anyone else.”

Gruden, who reportedly spoke with the Raiders’ players about the comments this morning, has provided a comment to the Wall Street Journal regarding the email, saying that he doesn’t recall writing it and that he apologizes to Smith.

“I’m really sorry,” Gruden said. “I was upset. I used a horrible way of explaining it.”

At the time, it is unclear if Gruden will be punished by the league for his comments, as the league is currently “reviewing Gruden’s status with the Raiders for potential discipline,” according to the Wall Street Journal.

The 58-year-old former Super Bowl-winning head coach is currently in the midst of a 10-year, $100 million contract that he signed with the then Oakland Raiders back in 2018.

As for Smith, the 57-year-old was unanimously elected as Executive Director of the National Football League Players Association in March of 2009 and is credited with playing a major role in negotiating the 2011 collective bargaining agreement.