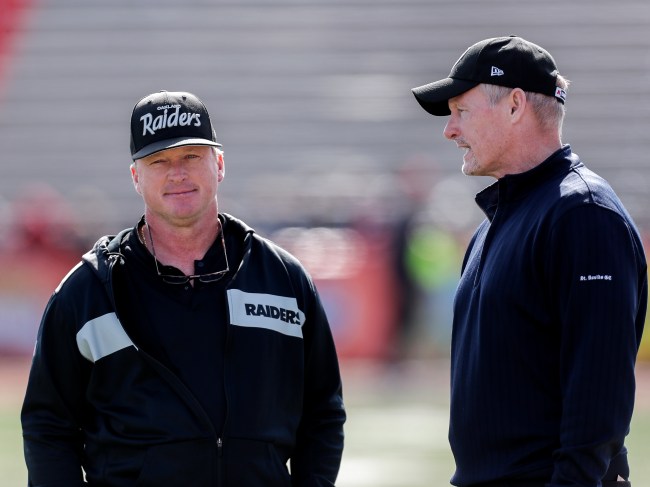 The NFL draft is next week and it seems like the Oakland Raiders, who have three first round picks, want to keep everything closely guarded.

According to a report by NFL Network’s Ian Rapoport the Raiders front office so paranoid that they sent their scouts home because they “don’t know who to trust.

Gruden and Mayock in the Raiders facility on Draft Night pic.twitter.com/GQa4ZxkilN

The Internet had some funny reactions to the Raiders abrupt move.

Raiders scouts yesterday: "Man, can't believe the draft is next week. After all our hard work we'll get to decide who we pick!"

If you are a Raiders scout, it’s time to find a new job! I’ve always liked Gruden but since he’s come back to the Raiders he’s done some strange things. https://t.co/XXLtdr0X1b

Worried about who to trust…

… Gruden is still in the room. pic.twitter.com/sVYoP7k8cL

Gruden in the war room after sending all of his scouts home pic.twitter.com/FHH5verC72

Mayock and Gruden are running a full stealth war room. Gonna be harder to get into than Cuba #RaiderNation

I know someone Gruden can trust pic.twitter.com/OxiYZl68bj

Apparently, some scouts were going to be let go after the draft as part of the regime change in Oakland.

Expectation has been that much of the scouting department would be turned over post-draft. Looks like word being out there on it led Mayock, Gruden, and Co. to close ranks. https://t.co/0bks0DIBIk