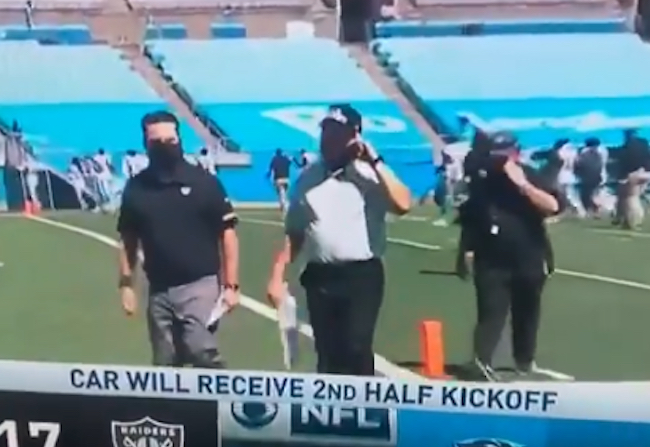 With the Raiders heading into the locker room up by 2 points at halftime, fans would assume coach Jon Gruden would be having a quick discussion with coaches or players.

Nope, Gruden was too busy yapping away on a cellphone.

Jon Gruden was taking a telephone call while walking off the field at halftime. Never seen that?? Is that legal…? pic.twitter.com/CNMHX7r7ug

Was Gruden calling home or perhaps reaching out to the Hair Club for Men for a potential endorsement?

According to ProFootball Talk, the head coach was doing a halftime interview.

According to the NFL, Gruden was conducting a two-question interview with the sideline reporter. In any other year, it would have happened with the reporter walking and talking to Gruden.

PFT said the league isn’t down with this idea, even under current Covid-19 and social distancing conditions. The networks, players and staffs of every team will get a reminder that “the cell phone approach is not an acceptable replacement” for face-to-face interviews.

Gruden and the Raiders won the game, beating the Panthers 34-30 in Carolina.