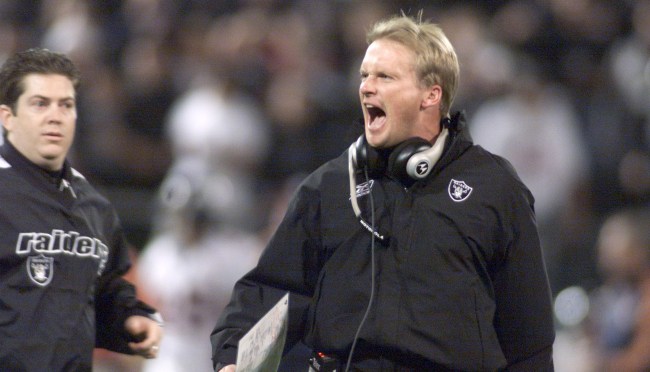 If you weren’t sure that the rumors about Monday Night Football analyst slash tailgating expert Jon Gruden taking over as head coach, again, of the Oakland Raiders, well, you should be. Because Gruden just confirmed that he is a “candidate” for the soon-to-be-Vegas Raiders head coaching job. I put the word candidate in quotes because I believe there’s an above-average chance that Gruden has already agreed to become their coach.

Over the final weekend of the NFL season as one coach after another was getting the axe, stories swirled about how the Raiders wanted Jon Gruden to be their next head coach. Not only did the team fire Jack Del Rio after just giving him a four-year contract extension last offseason, they reportedly are even dangling an ownership stake in the franchise. A franchise, that as I mentioned, will be moving into a brand new state-of-the-art football stadium in Sin City within the next couple of years.

Now, with Del Rio officially on the unemployment line, Gruden, who had previously dismissed any rumors, is now slowly, but surely, changing his tune. ESPN has yet to offer Gruden a new contract and in a phone interview with the Bay Area News Group on Tuesday Gruden had this to say about the Raiders job…

“My understanding is they’re interviewing candidates this week and they’re going to let everybody know sometime early next week or whenever they make their decision,” Gruden said.

Asked specifically if he was a candidate, Gruden said, “Well, I think I am being considered, yes. I hope I’m a candidate.”

He is so hired.

My guess is that Gruden is just waiting for two things to happen. (1) He has to finish up his announcing duties for ESPN through the playoffs, and (2) the Raiders have to go through the sham of interviewing a minority candidate according to the NFL’s “Rooney Rule” before making an announcement.

After those two things have been completed it will be Gruden time.

The Mercury News also reports that Gruden has been contacting prospective assistant coaches, with another report stating that he has already reached out to his former Raiders quarterback Rich Gannon – the same Gannon Gruden’s Bucs routed in Super Bowl XXXVII – to become the team’s QB coach.

As Jon Gruden called around to round up assistants, one name kept coming up as a QB coach: Rich Gannon. He has the #Raiders game today 🤔🤔🤔

So will Gruden actually become the next Raiders head coach? Probably. Will he get an ownership stake, which Raiders owner Mark Davis has also offered Gruden in years past, and would require approval of all 32 NFL team owners? If he does, it would be very, very surprising.

Oh yeah, also, so much for that “growing sense” Gruden will be rejoining the Buccaneers as their new head coach.