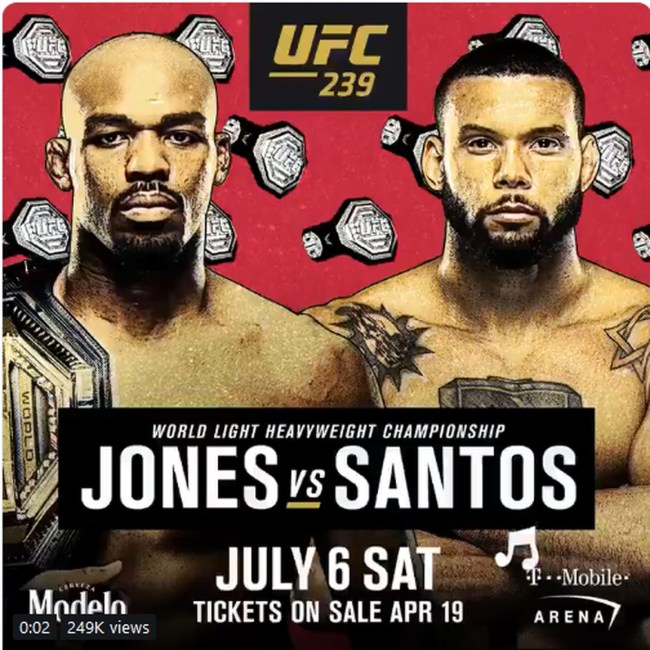 Jon “Bones” Jones is quite simply the best fighter to ever step foot inside the UFC Octagon. He’s the greatest of all time, a once-in-a-generation athlete who transcends time and style, and reinvented MMA, completely changing the game.

Sure, Conor McGregor is the better talker, Chuck Liddell had the heavier hands, and Anderson Silva had an electrifying style all his own, but there’s just something about Jones, something that makes him, well the G.O.A.T., and “Bones” is gearing up to put it all out there on July 6, when he headlines the UFC 239 Pay Per View main card on ESPN+.

Taking on challenger Thiago Santos in the UFC 239 main event, Jones has seen basically every possible stylistic matchup inside the Octagon. He’s out-wrestled the wrestlers, out-boxed the boxers, out-kicked the kickers, and out-grappled the grapplers. He even withstood Chael Sonnen’s favorite weapon, his mouth, despite almost losing a toe inside the cage, and once pile-drived his way out of a deep Vitor Belfort armbar to retain the light heavyweight title, so despite Santos’ sickening knockout power, Jones is still a heavy favorite heading into UFC 239. He’ll likely be a favorite for the entirety of his career because, well, he’s just that good.

The thing about Jon Jones is, he has all the tools. He can beat anyone in any way imaginable and make it look easy with his lean, leggy frame and 84-inch wingspan. Dude’s body is a weapon, much like a Swiss army knife, where every limb has the ability to damage opponents. The sheer variation of Jones’ attacks is reason enough to shell out a few duckets to catch the fight live on Pay Per View, but for anyone needing some extra incentive, here are a few highlights from a record-breaking and unparalleled career.

Back in March 2011, Jon Jones was a highly touted and promising 23-year-old on the cusp of stardom.

Having already won six of his first seven bouts inside the UFC Octagon — the lone loss on his record remains a controversial disqualification to Matt Hamill in 2009 that is essentially disregarded by the fanbase as a referee’s error — Jones was propelled into a title fight against the legendary Mauricio “Shogun” Rua after his teammate Rashad Evans was forced to withdraw from the bout due to injury.

Jones made the most of the opportunity, crushing “Shogun” with a vicious third round knee and punches that sent the former UFC and Pride champion crumpling down to the canvas.

With the win, Jones became the UFC’s youngest ever champion. In the eight years since, he’s never lost, headlining a dozen more UFC Pay Per View cards, fighting for the title on every single occasion.

A Rare Standing Guillotine Over Machida

While Jones used his kickboxing to dispatch of “Shogun,” it was jiu jitsu that did the trick against Lyoto “The Dragon” Machida at UFC 140.

Once again facing a former champion, Jones was tested early on by Machida and his awkward karate style based on counter punches and explosive forward rushes.

Jones took a few shots in the opening round, but by the time the fight reached the second period, it was becoming clear that “Bones” had too many weapons for “The Dragon,” and that Machida would be unable to catch Jones because the champ didn’t really need his wrestling to win the fight.

Instead, Jones found his opening along the fence, sinking in a deep standing guillotine choke. Machida quickly lost consciousness and went limp, later falling to the ground after the referee pulled Jones off of his opponent.

It was a rare standing guillotine sighting inside the Octagon, and, as a result, the legend of Jon Jones continued to grow.

The First to Finish “Rampage”

Sandwiched in between the Rua and Machida fights was Jones’ first title defense, which took place at UFC 135 in September 2011.

Taking on Quinton “Rampage” Jackson, another former UFC champion, “Bones” used his kickboxing and size to keep the shorter, hard-hitting Jackson on the outside, battering “Rampage” with strikes and the occasional oblique kick to the knee.

With “Rampage” losing steam in the fourth round, he attempted to bring the fight to the ground. Bad move. Jones was all over it, dominating in the grappling exchanges before taking Jackson’s back, sinking in his hooks, and forcing the rear-naked choke.

The win cemented Jones’ status as a defending champion, and with the victory, he became the first fighter to finish “Rampage” inside the UFC Octagon.

Two of the great things about mixed martial arts are elbows and knees. Illegal in boxing, but totally fair game in MMA, elbows and knees provide such a serious impact that a fight can be so finitely finished when one lands clean on the jaw.

Jon Jones has always had a propensity for well-timed elbows, but what he did to Brandon Vera a year before he became champion was a thing of stunning beauty.

Postured up inside Vera’s guard, Jones landed a perfect left elbow, smack on Vera’s cheekbone. The impact alone can be audibly heard with a pronounced crunch. Jones then followed up with a second elbow before Vera turtled up and “Bones” poured on the ground and pound.

It was an early sign of the type of mastery Jones would go on to dish out for the ensuing decade.

In Case of Emergency …

It’s not like Jones has finished every fight he’s ever had.

“Bones” has gone the full 25 minutes in half a dozen title fights, but even when he hears the judges scorecards for the decision, Jones is still dominating opponents nearly every time out.

The closest he’s ever been to losing was a unanimous decision win over Alexander Gustafsson at UFC 165, a fight that Jones reportedly didn’t even really train for. He also almost lost the title via disqualification earlier this year against Anthony Smith at UFC 235, but that was some fluke type of situation where Jones kicked a man while he was down.

Tune in to the UFC 239 Pay Per View main card on ESPN+ to find out.