Jon Jones Reportedly Tests Positive For Steriods, Will Be Stripped Of UFC Title And Is Facing 4-Year Ban 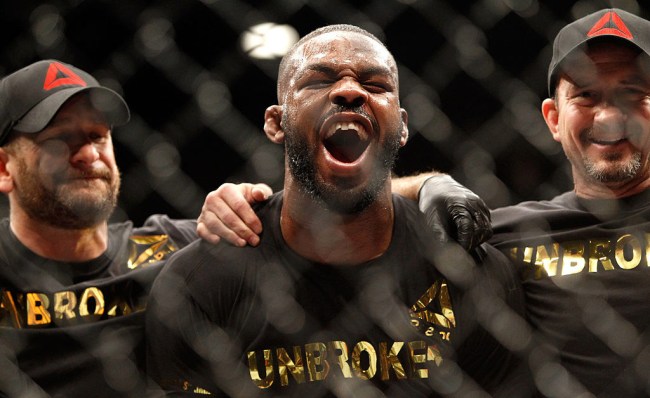 Jon Jones’ MMA career has hit another roadblock. After his huge knockout win against Daniel Cormier at UFC 214, Jones reportedly failed his post-fight drug test, has been stripped of his title and is facing a lengthy ban for the Nevada athletic commission.

Jones won the July 29 fight — taking the UFC light heavyweight belt from Cormier with a savage head kick followed by a barrage of punishing punches to Cormier’s head.
The title now goes back to Cormier.

Jones’ fight against Cormier last month was his first fight back after serving a 1-year ban or testing positive for two banned substances.

Update: The UFC has released a statement on Jon Jones’ positive test.

The UFC organization was notified today that the U.S. Anti-Doping Agency (USADA) has informed Jon Jones of a potential Anti-Doping Policy violation stemming from an in-competition sample collected following his weigh-in on July 28, 2017.

USADA, the independent administrator of the UFC Anti-Doping Policy, will handle the results management and appropriate adjudication of this case involving Jones, as it relates to the UFC Anti-Doping Policy and future UFC participation. Under the UFC Anti-Doping Policy, there is a full and fair legal process that is afforded to all athletes before any sanctions are imposed. The California State Athletic Commission (CSAC) also retains jurisdiction over this matter as the sample collection was performed the day before Jones’ bout at UFC 214 in Anaheim, CA, and USADA will work to ensure that the CSAC has the necessary information to determine its proper judgment of Jones’ potential anti-doping violation.