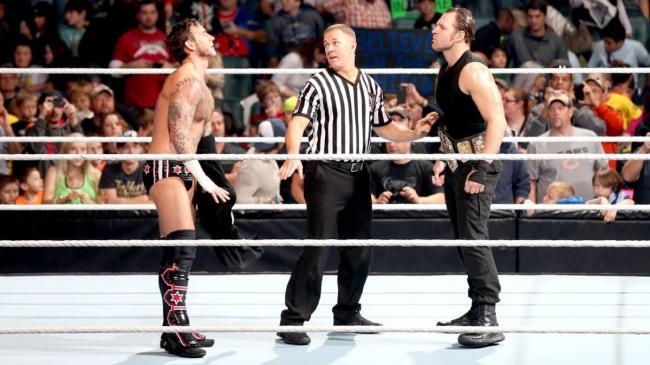 John Moxley was involved in some funny moments during his run in the WWE as Dean Ambrose including attacking potted plants, calling Stephanie McMahon a hoe, stealing Chris Jericho’s prized jacket, and attacking Seth Rollins with a hot dog cart.

Moxley, now in AEW and preparing for an “Exploding Barbed Wire Death Match” against Kenny Omega at the upcoming AEW Revolution show, did an interview with Inside The Ropes and talked about a funny WWE moment that wasn’t supposed to be funny at all.

During a January 2014 episode of Old School Raw, Moxley got knocked out thanks to CM Punk and his “Go To Sleep” finisher.

After getting knocked out, WWE Hall of Famer Jake “The Snake” Roberts unleashed one of his pet snakes on a helpless Moxley.

Moxley talked about the snake actually tickling his face and trying to “play dead” and exactly what CM Punk was screaming at him in the ring.

CM Punk was in a ring and he just goes, ‘That snake s— on your face!’

So I started laughing and I was supposed to be knocked out from the DDT, and I was laughing at him yelling that snake s— in my face, which it didn’t – it did not s— on my face, I don’t think.”

Both Moxley and Jake Roberts are now a part of AEW and the former WWE Champion admits he’s “never talked to” Roberts about the incident because it “seems like it was like a million years ago.”

[via Inside the Ropes]