Jon Rahm Hilariously Explains How Tiger Woods Only Shares Advice With One Other Player, And It’s Definitely Not Him 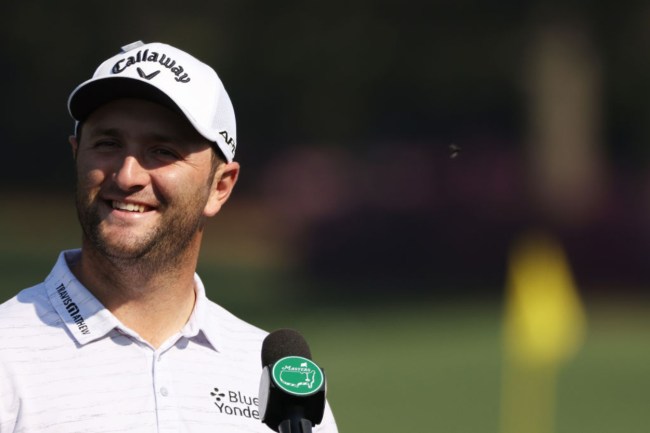 Like anyone good at their craft, Tiger Woods keeps some tips and hints he’s picked up over the years to himself. He is notorious for not giving out any advice or secrets about certain golf tournaments or courses, especially involving the Masters.

If you’re in Woods’ very tight inner circle – a group Justin Thomas is fortunate to be in – you may be gifted some wisdom from the big cat.

Jon Rahm has learned that about Woods over the years.

The reigning U.S. Open champ was asked during his Tuesday press conference at the Masters if he’s ever gotten advice from Woods about the quirks of Augusta National.

The short answer to that question is no.

“I think there’s only one man in this field that hears advice from Tiger, because I’ve asked before and I get nothing,” Rahm said. “You might need to ask Justin Thomas.”

“I’ve asked [Woods] before. I remember asking him at East Lake the year he won [the Tour Championship in 2019] on the putting green in the practice round: ‘Hey, man, any tips for Bermuda?’ He turned around and said, ‘It’s all about feel,’ and just kept going.”

🗣 "I've asked before and I get nothing."

Former World Number One Jon Rahm says he has never been given much advice from Tiger Woods 🐅 pic.twitter.com/w2QlIi9BAB

Justin Thomas The Chosen One To Receive Advice From Woods

Rahm went on to explain that he asked him about chipping into grain at the Hero World Challenge one year, and all Woods offered up was “you’ve just got to be shallow.”

Meanwhile, Thomas was “getting a whole dissertation on what to do,” Rahm joked.

Funny enough, Justin Thomas spoke with the media shortly after Rahm did. JT was asked what the best piece of advice Woods has given him about playing Augusta National and he politely said “I’m not going to tell you.”

JT and Woods are on the same page, neither want other players in the field knowing any secrets.