Cubs Infielder Jonathan Villar Suffered The Most Bizarre Injury, Which Involved An Exercise Band, You’ll Ever Hear About 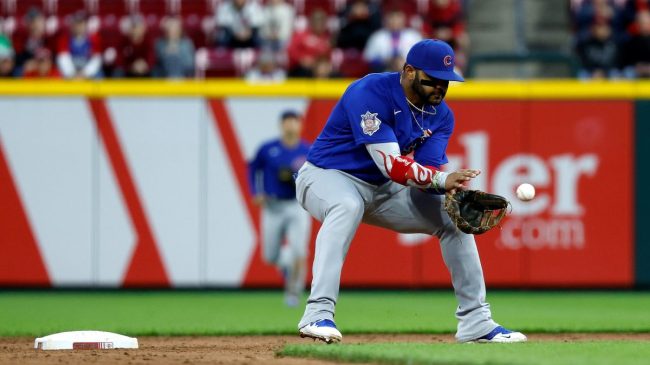 Cubs middle infielder Jonathan Villar was sent to the IR for an injury suffered on May 27th according to beat writer Meghan Montemurro. The injury was apparently to his mouth and required “significant dental work.”

Chicago will give Villar a brief hiatus as he recovers from the incident.

Villar has been valuable part of the Cubs roster thus far. He’s seen action in 32 games and provides a ton of versatility in the field. He’s played at second base, third, base, and shortstop thus far, giving the team some flexibility in the lineup.

And he’s typically spectacular on defense. He’s notched a .946 fielding percentage to the this point in the season and is known for his glove at the professional level. His bat could use some work as the switch hitter is batting just .239 on the year, but overall, he’s an asset.

Now, usually when you hear about a face injury in baseball it circles around being hit by a pitch or being struck by a batted ball. That’s far from the case for Villar.

Details are now coming out of his bizarre injury, and it’s one you’ve probably not heard before.

Villar was reported injured while working out as opposed to on the field. The culprit? An exercise band.

Villar was using an exercise band when it snapped back into his mouth, causing the injury and requiring the significant dental work. https://t.co/PubyWwl2K7

If anyone has used these things before, you know the risk. Stretch that bad boy out and you’re viable to catch a whipping if you lose your grip.

Hopefully the infielder is able to make a speedy recovering and get back on the diamond in the next week or so.