USC Transfer WR Jordan Addison Shares How He Got Carson Palmer’s Blessing To Wear No. 3 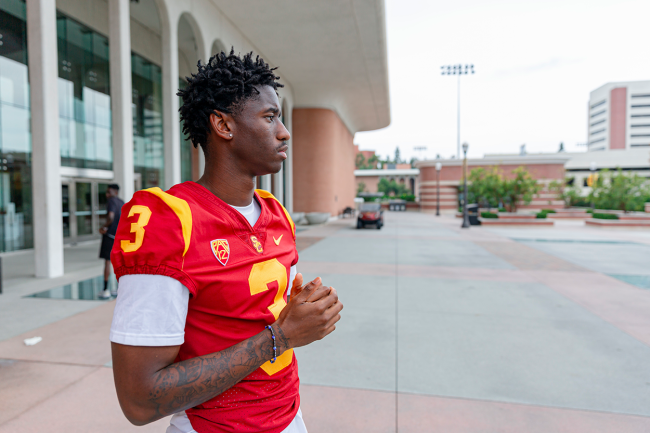 Of the high-profile transfer that took place during the college football offseason, Jordan Addison leaving Pittsburgh for USC might be the the biggest. The reigning Biletnikoff Award winner will likely play one year in Los Angeles before going pro and will channel a Trojans legend while doing so.

Carson Palmer, who won the Heisman Trophy in 2002, had his No. 3 jersey retired at USC shortly after being drafted by the Bengals with the No. 1 overall pick in the 2003 NFL Draft. His number will come out of retirement for Addison in 2022.

Earlier this year, at the end of June, Palmer revealed why he is letting Addison wear the No. 3. Earlier this week, Addison shared the story behind how he got Palmer’s blessing.

First and foremost, Addison said that he first chose the number in high school because of his favorite receiver, Calvin Ridley. He has worn it ever since, which Ridley appreciates.

Upon arrival at USC, Addison asked to wear the No. 3, but head coach Lincoln Riley said that it was not up to him and gave his new pass-catcher Palmer’s number.

“I had got his number from Lincoln (Riley), he told me I had to check in with him to wear the number,” Addison said. “So, he got us on the phone. We had a great conversation and he gave me his blessing on wearing the number. I really appreciate him and I’m going to show him why him giving me the number was the best decision.

From there, Palmer wanted to make sure that Addison is fit to carry out the legacy of the number. The latter said that he even did a little bit of research on the former because he wasn’t even born when Palmer was at USC. Ultimately, things worked out and Palmer said okay.

“I watched a little bit of his tape before I called him just to get a little bit more about what he did in college because I’d seen what he did in the pros. That conversation went really well though. He told me he didn’t just want to give his number to anybody. He wanted to make sure I was the right fit character-wise. It really means a lot to be wearing the number that a Heisman Trophy winner wore when he played here.”

Here is the story in Addison’s own words: