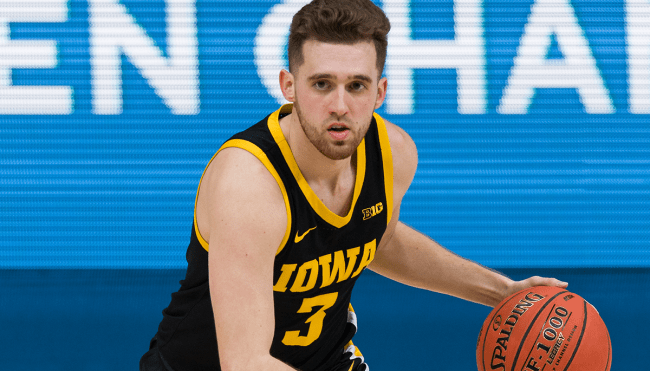 If I’ve learned anything in life, it’s that if you’re going to stay out until last call in a college town, it’s not going to hurt to be aware of your surroundings and keep your head on a swivel. Unfortunately, that can be kind of hard to do when you’re in the state most people tend to find themselves in when they make the decision to stay out until the bars close.

However, even if you’re operating at Peak Sobriety, there’s only so much you can do to convince someone who is decidedly not that you didn’t mean to call their honor into question by brushing their shoulder while going to close your tab—which can often lead to the kind of scene Iowa Hawkeyes guard Jordan Bohannon found himself in the middle of over the weekend.

According to TMZ, the basketball player was making the rounds in Iowa City shortly after Saturday night gave way to Sunday morning and found himself exchanging words with some of his fellow bargoers at DC’s.

One bystander pulled out their phone to capture the altercation and filmed a vintage Bar Fight Video featuring a girl saying “Staaaahp,” a guy repeatedly saying “Yes!,” and Bohannon getting knocked out cold with a cheap shot.

Jordan Bohannon fight video. This is literally the scene at bar close almost every night in Iowa city. Jordan’s crew gotta do a better job looking out for their boy he got KTFO. pic.twitter.com/e4bCMOpXnu

On Monday, coach Fran McCaffery revealed Bohannon had managed to walk away relatively unscathed and the school confirmed police are investigating the incident.

Based on his reputation among Hawkeyes fans, there could be another side to the story that’s yet to emerge, but I guess we’ll just have to wait and see.