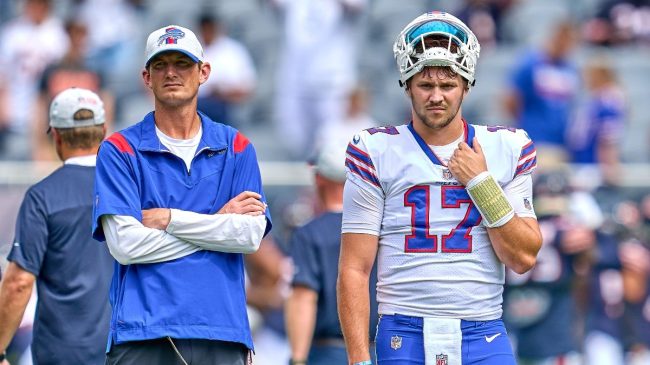 The Buffalo Bills surprisingly lost to the Miami Dolphins after being unable to spike the ball in time before the time expired. Immediately after the game, offensive coordinator Ken Dorsey lost his mind in the booth. Since then, he’s received some flack for his behavior. Now, superstar quarterback Josh Allen comments on the situation.

During his weekly appearance on Kyle Brandt’s Basement, Josh Allen spoke up about Ken Dorsey going berserk in the booth. Although many have criticized the Bills’ offensive coordinator, it seems the players respect Dorsey even more so. As Allen puts it, “our guys freaking love seeing that… He wants to do everything in his power to win.”

"He's the one that showed it to me… Our guys freaking love seeing that… He wants to do everything in his power to win." – @JoshAllenQB on Bills OC Ken Dorsey's reaction video

At the end of the day, it probably is refreshing for players to see that type of emotion from their coaching staff. It’d be a lot worse if Dorsey was seen smiling, right? Additionally, the Bills’ offensive coordinator is the one who showed it to Josh Allen and the team. If anything, that pure emotion Ken Dorsey went through can be used as motivation for their Week 4 matchup.

Buffalo looked sluggish in their matchup against the Dolphins. Many have pointed out the stadium design in Miami to potentially be the reason. Even so, the Bills will have a chance to redeem themselves in Week 15, when they face their AFC East rival at home. This time around, the cold weather will benefit Josh Allen and his teammates.