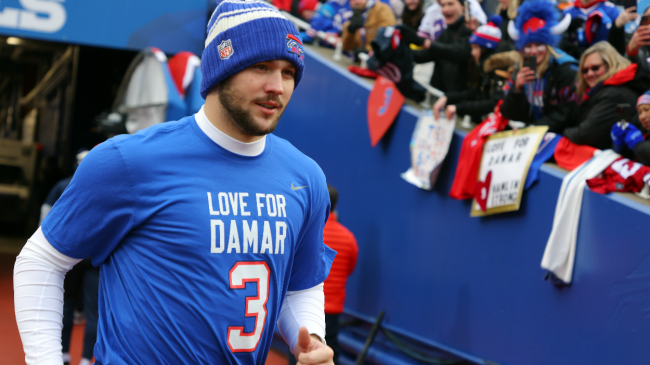 There’s been an off the wall conspiracy theory involving Bills defender Damar Hamlin floating around the internet. It involves his presence at a recent playoff game.

The defensive back was involved in a scary incident in the regular season that saw him nearly lose his life. The situation led to the cancellation of a game between the Bills and Bengals.

Those two foes faced off again in the postseason, and while Hamlin wasn’t on the field, he was in attendance. He was seen being dropped off at the game by Buffalo Bills staff members in a golf cart and was also spotted sitting in a suite during the contest.

Many online put their tin foil hats on by developing a conspiracy theory that Damar Hamlin was not actually in attendance. Rather, it was a body double dropped off at the game to create the illusion of Hamlin’s presence.

Buffalo teammate Josh Allen is on the record as saying those rumors are false. He shut down any and all theories during an appearance on Kyle Brandt’s podcast.

“Yeah, that’s stupid,” Allen replied when asked about the Damar Hamlin conspiracy. “There are mainstream media outlets pushing this?… One, [sunglasses and a hat] is Damar’s swag. He likes wearing that. Two, he was in the locker room with us pregame. So, yes, that was Damar… There’s absolutely no chance [these theories are real]… He was with us pregame, postgame, and up in the suite.”

Most people probably assumed that this was the case, but if there’s anyone that needed to hear it… here you go.

Unfortunately for Hamlin, he had to watch on in a losing effort. The Bills were bested by the Bengals, ending their 2022 season. Thankfully, though, we can finally put these conspiracy theories to rest.