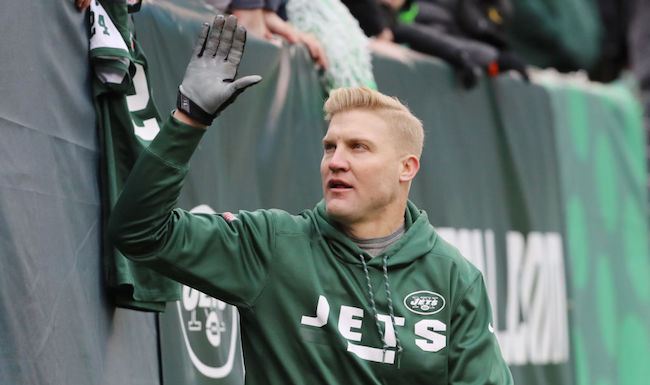 The NFL off-season is already off to a wild start, with teams wasting no time signing largely unproven players to absurd contracts and athletes getting into passive-aggressive fights with the front office on social media. It’s also been a great week for anyone who hates the New England Patriots, as the team has already had to deal with a few significant losses in free agency with a potentially franchise-chancing one on the horizon.

As a result, some signings tend to go a bit under the radar, so you can be forgiven if you weren’t aware Josh McCown agreed to a one-year, $10-million deal with the New York Jets to return as their starter next season. The quarterback signed the contract a few hours before Teddy Bridgewater inked his own for half that amount, and he decided to celebrate the payday like everyone should: by stopping at Chick-fil-A.

McCown posted a photo of himself finalizing the deal on his phone in the parking lot while waiting for food, deflating the notion in my head that every NFL contract has to be signed with a gold pen in a wood-paneled office before being sealed with a firm handshake.

No better time to sign a deal with @nyjets then waiting on some @ChickfilA
Photocred: Aiden McCown pic.twitter.com/fy6aNOgQpE

I’d like to thank McCown for giving me the opportunity to remind everyone of one of an amazing football moment that was also brought to us by Chick-fil-A: the moment Northwestern realized they’d be chowing down on chicken sandwiches after an upset of Notre Dame.

Sometimes it’s the little things in life that have the biggest impact.