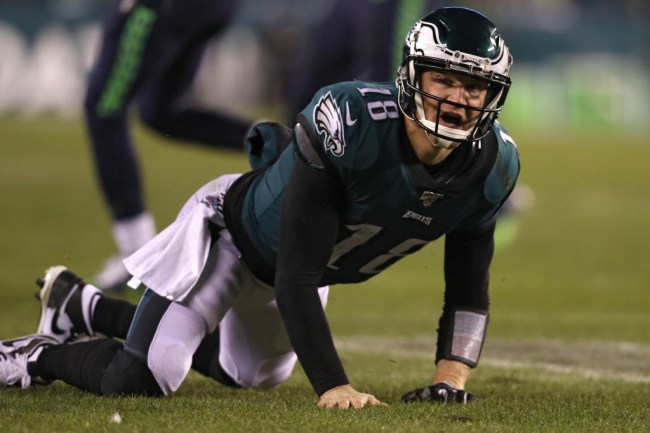 The Philadelphia Eagles went on an absolute tear to start off their season in 2017 thanks in no small part to the efforts of Carson Wentz, who finally started to look like the franchise quarterback the team was hoping he’d turn into when they drafted him and he seemed like a potential candidate for the MVP award.

However, the Eagles suffered a major blow in Week 14 when Wentz went down with what was ultimately diagnosed as a torn ACL that brought his season to an end and all eyes turned to Nick Foles in the hope he’d be able to salvage the season.

Foles finished what Wentz started in the game where he went down and the win ensured the Eagles would at least make the playoffs, although there was no telling how far they’d get with a (former) backup at the helm.

It’s safe to say Foles did a pretty damn good job considering the circumstances and managed to earn some MVP honors of his own when he led the Eagles to a Super Bowl victory over the Patriots thanks to both his impressive passing and the catching ability he showcased during the most famous play of that game.

Some people argued Foles should remain the starter the following season but Wentz ultimately picked up where he left off, and this year, he led Philadelphia back to the playoffs yet again, where they faced off against the Seahawks last weekend.

Eagles fans found themselves facing flashbacks when Wentz was knocked out of the contest in the first quarter after suffering a concussion courtesy of a questionable hit delivered by Jadeveon Clowney and Josh McCown was tapped to work the same magic Foles did during the championship run.

The 40-year-old did what he could but it wasn’t enough to get a victory in a game that left him battered based on what he looked like heading to the locker room.

An emotional Josh McCown heading to the locker room:

It took a bit, but we now know why McCown had to be helped off of the field, as ESPN‘s Tim McManus reports he played the majority of the game with a torn hamstring he suffered in the first half.

The quarterback provided some insight into how things went down, saying:

I think I popped one of the tendons off, went into halftime and made our adjustments, talked to the docs, looked around and realized I was the only quarterback left, so we kept it rolling. Went back out in the third quarter and felt something else pop again and I was like, ‘Oh man, this’ll be more fun back there.'”

McCown was asked about his future following the game and declined to give an answer but I’d say it’s a bit doubtful he’ll be staging a comeback after this. With that said, even if he didn’t win, that’s one hell of a way to go out.