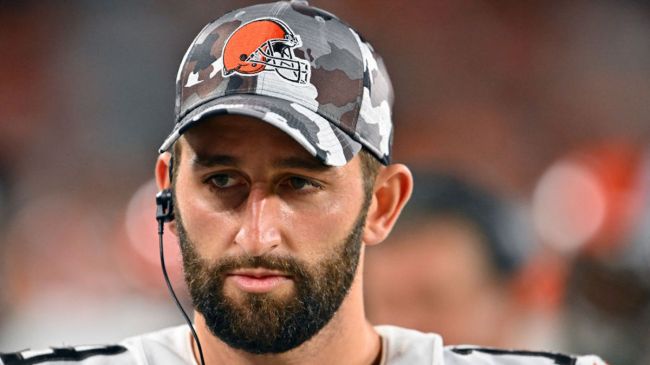 It’s been quite a strange career for former UCLA star Josh Rosen, who we’ve been writing about on this website since 2015.

If you recall, Rosen — who is still, somehow, just 25 years old, two years younger than Baker Mayfield — was quite the highly touted prospect coming out of high school as both Rivals.com and Scoout.com ranked him as the best quarterback in his graduating class.

He made headlines immediately after arriving on the UCLA campus as he infamously blew up an inflatable hot tub in his dorm room. Rosen would ultimately make waves on the field, too, as his play for the UCLA Bruins got him drafted by the Arizona Cardinals with the 10th overall pick in the 2018 NFL Draft, the same year as Mayfield, Sam Darnold, and Josh Allen. Ever since, though, Rosen’s career has been one fall-from-grace after the next.

Just a year after he was drafted, the Cardinals selected his replacement in Kyler Murray and he’s since bounced around to the Dolphins, Tampa Bay Buccaneers, San Francisco 49ers, Atlanta Falcons, and Cleveland Browns. Unfortunately for Rosen, though, his time in Cleveland was short-lived as he was cut by the team just about a month after signing a one-year contract.

Josh Rosen is being cut by the Cleveland Browns, his sixth team since being drafted in the first round of the 2018 NFL Draft

Expected to be among the #Browns cuts to get to the 53-man roster, per league source: (some will be invited to return to the practice squad)

The quarterbacks the Browns are going with instead? Deshaun Watson (obviously), who’s suspended for 11 games, Jacoby Brissett, who will be the starter in Watson’s absence, and Joshua Dobbs.

Despite being a former Top 10 NFL Draft Pick, Rosen has started just 16 games during his four-year-long NFL career, with every single one of those games being on poor Cardinals and Dolphins teams. In those 16 games, Rosen completed 54% of his passes for 2,864 yards, 12 touchdowns, and 21 interceptions.

Rosen’s story just goes to show that when and where a player is drafted has the potential to shape the arc of their entire career if the situation isn’t right.

RELATED: Josh Rosen Reveals How Poorly The Cardinals Treated Him After They Drafted Kyler Murray And Shipped Him To Miami