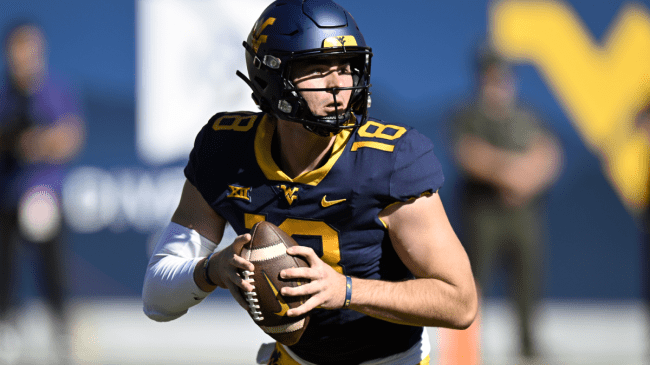 JT Daniels is on the move once again. The former five-star recruit announced that he’d be entering the transfer portal this coming offseason.

Daniels has been a journeyman over his lengthy college career. He’s suited up and started for three different programs since 2018.

The passer began his college career at USC, going to Los Angeles as one of the top prospects in the high school class. As a freshman, he lit the PAC 12 up by throwing for nearly 2,700 yards over 11 games.

Unfortunately, an injury derailed his sophomore season, and eventually, his tenure at Southern Cal. After being surpassed by Kedon Slovis on the depth chart, Daniels opted to transfer to national title contender Georgia where he was expected to take over a starting role.

Injuries, once again, slowed Daniels’ rise up the roster as he’d only see action in nine games over a two-year span. He was supplanted by Heisman finalists Stetson Bennett and was on the move out yet again.

Last year, he landed at West Virginia where he started 10 games in a bounce back campaign. Despite the success over the first half of the season, Daniels ceded the starting role to Garrett Greene over the Mountaineers’ last two games.

Now, JT Daniels is on the hunt for a new home.

Fans were quick to react to the somewhat surprising news, posting hilarious responses to possibly seeing the passer in a fourth new uniform.

One person wrote, “I’m convinced JT Daniels has an NIL deal with the transfer portal itself,” while another said, “JT Daniels is trying to play in every Power 5 conference.”

If he does in fact leave West Virginia, he could become the first college football player to suit up for four different FBS programs. And as a starter, to boot.

Even more surprising, he could still have up to two years of eligibility remaining given medical redshirts and the 2020 COVID season pass. It should be interesting to see where JT Daniels lands in 2023.