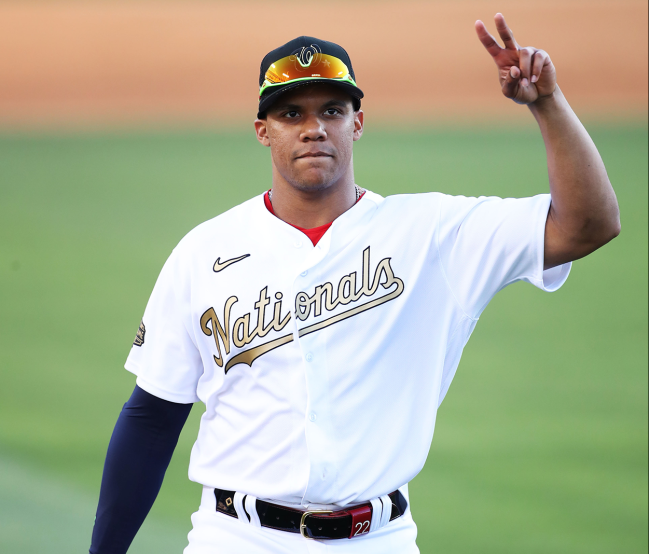 Juan Soto is the biggest name that might be dealt prior to Major League Baseball’s trade deadline on August 2nd. His reaction to fan chants at the All-Star game on Tuesday night make it very clear he’s ready for bright lights

The 23-year-old superstar recently turned down a 15-year, $440 million extension with the Nationals. In turn, Washington is listening to offers for Soto.

While there is no telling whether the two-time All-Star will actually be traded, he made it clear that he is not interested in staying in D.C. for the rest of his career by declining the offer. If the Nationals are to trade him, he would have three postseasons left on his current contract, so his return value is going to peak right now.

Should Soto be traded, the most realistic destinations would be the Red Sox, Mets, Yankees, Rangers and Dodgers. It will be a lofty asking price from whichever teams choose to get involved in the conversation, but Soto is a franchise-changing player.

With a trade looming, the fans in Los Angeles made it very clear that they want him in the City of Angels. Specifically, they want Soto in Dodger blue.

As the Dominican-born superstar stood in left field on Tuesday night, the home fans started chanting “Fu-ture Dodg-er *clap clap clapclapclap*” in full voice. The chant was simply too loud for Soto not to acknowledge, and he turned around to greet them with a massive smile.