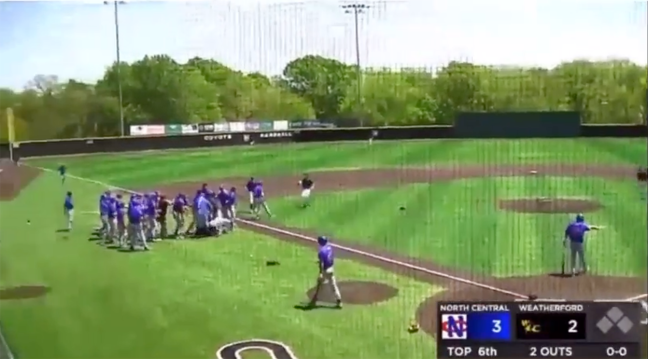 On Wednesday afternoon, one of the more bizarre scenes unfolded during a junior college baseball game in Texas. As North Central Texas and Weatherford College squared off on the diamond, a bench-clearing incident ensued.

After hitting a home run in the sixth inning, North Central’s Josh Phillips took his sweet time rounding the bases and allegedly swore in the direction of the mound. Regardless of what was actually said, Phillips was undeniably taunting.

With that being said, what came next was unwarranted. Weatherford pitcher Owen Woodward, who gave up the dinger, had enough of Phillips’ antics.

As the opposing batter rounded third, Woodward put his head down, charged off of the bump and ROCKED Phillips’ world with a VICIOUS slobberknocker. It was a violent, form tackle that sent Phillip’s batting helmet flying and resulted in the North Central bench spilling out onto the field.

It was truly wild moment between North Central Texas and Weatherford College baseball. Take a look:

LAY THE LUMBER, MY GOODNESS 😱pic.twitter.com/8XGoX7Dz8S

While most people would agree that there is some element of “guys being dudes” and “competitive spirit” here, it’s not a great look. Phillips played some role in the incident with the taunting, but Woodward’s reaction was not cool.

As a result of the incident, which quickly went viral across the internet, suspensions were handed out to both sides. However, the suspensions are rather confusing and surprisingly short.

Weatherford officials have said that Woodward could face expulsion from the school. The North Texas Junior College Athletic Conference only suspended him four games.

On the other side of the incident, Phillips has been suspended two games. In addition, “all team members that were in the dugout or bullpen” and any assistant coaches who stepped onto the field received a two-game suspension for both sides.

While both sides definitely played a role in the incident, it is North Central Texas that is being most penalized across its entire roster, even though it was Weatherford whose pitcher laid the hit. For Woodward to get four games while Phillips gets two seems a little bit of an arbitrary discrepancy, even if you are of the very fair belief that Woodward should not have been suspended any longer than four games because it’s time we “let the boys play.”

If North Central Texas is unable to field a team for its next two games against Weatherford, it will have to forfeit. Both teams were forced to forfeit the game that was stopped because of the tackle incident.