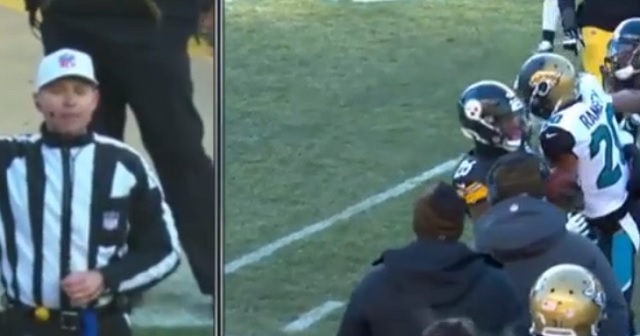 It seems like bad reffing is going to be an ongoing problem throughout the NFL playoffs.

Early in today’s Steelers-Jags game, center Maurkice Pouncey got away with shoving a ref on the field and was somehow not penalized for his actions.

In the third quarter, Jalen Ramsey was called for a penalty for a late sideline hit on LeVeon Bell but after looking at the replay it was clear that Ramsey was pushed into Bell by Steelers wide receiver JuJu Smith-Schuster.

That was a pretty good sell by Bell who flopped like a fish when Ramsey was pushed into him. The Steelers were able to score just a few minutes later on the same drive to move cut the Jaguars lead down to a touchdown.

Of course the Internet was fucking livid at the refs for screwing the Jags with this bogus call on Ramsey.

Terrible call by refs who were looking right at Ramsey getting pushed.

Refs need to chill out with these calls. That hit out of bounds was sawfter than a John Cena shoulder tackle.

I guess the refs want a Steelers-Pats game next week

The call on Ramsey was absolutely horrific. The refs have to be held accountable at some point. That said, I have no dog in this fight and that Pass & catch from 7 to 26 was incredible. I am entertained! #JAXvsPIT #HereWeGo #DTWD

After the terrible reffing in the Pats-Jags game and today’s Steelers-Jags game the NFL needs to something to make sure fans don’t feel cheated.