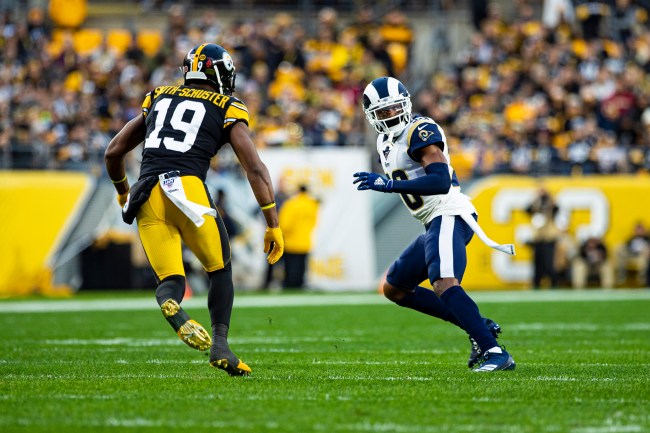 JuJu Smith-Schuster hit the legal age to have a sip of alcohol just last year. He has to pay a daily surcharge if he wants to rent a car. He spent his first years in the NFL learning from a guy who has become a walking clown show. Still, despite everything, the dude has become a professional and great asset to the NFL.

The 22-year-old Pro Bowl receiver once again showed why he has a winning mentality in response to Jalen Ramsey’s comments downplaying his talents by praising his predecessor.

“No disrespect to him, he’s not Antonio Brown,” Ramsey said before his Rams lost to the Steelers, 17-12, Sunday . “I matched up with Antonio there for two years, and that was a good battle, and I held my own in those battles, and yeah, now I’m going up against a different person, different body type, different receiver a little bit. He can make plays.”

JuJu was held to just three catches for 44 yards in a game where Ramsey had help in double teams. After the win, JuJu responded to Ramsey’s comments. Try to imagine a 22-year-old Antonio Brown responding like this to someone who said he ain’t shit. It is literally impossible.

Tired: “Fuck that dude. I’m the best there ever was, bitch!”

Wired: “He’s right. I still must improve to be the best me I can be.”

JuJu also described Ramsey’s demeanor on the field just as you’d expect from a guy who has vocalized his opinion on literally every player in the league.

“He talks a lot,” Smith-Schuster said of Ramsey. “He talks so much. He said so many cuss words I’ve never heard of, and I’m 22 years old. He’s a good player, man.”

“It’s a lot different than him being in Jacksonville, where he’s able to do whatever he wants. Over here, he has to pretty much do what he’s told. He has to listen to [Eric] Weddle. It’s different. It’s a great experience. I wish we had more balls thrown at us, but it’s hard when you’re double-teamed.”

Jalen Ramsey mic'd up against the Patriots.

"You can't f–k with me, Gronk!" pic.twitter.com/iAFMRiOslU