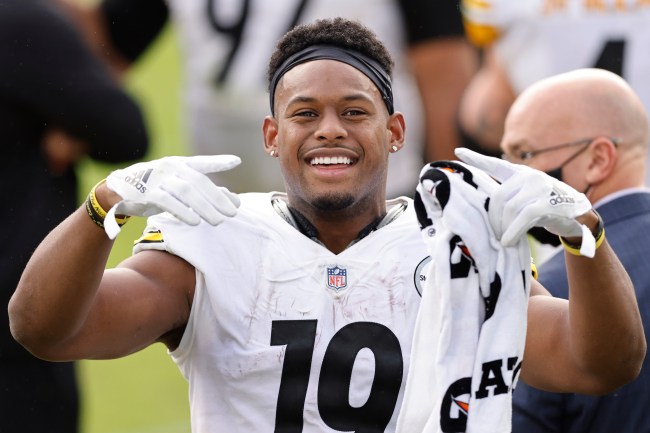 On Friday afternoon, JuJu reportedly took a “massive” pay cut and signed a one-year deal with the Steelers.

JuJu Smith-Schuster is returning to Pittsburgh on a 1 year deal, taking a massive paycut to return to his home over larger offers from divisional rivals and Super Bowl contenders to accommodate Pittsburgh’s tough cap situation. JuJu is staying home.

According to Adam Schefter, several teams were interested in luring JuJu away from the Steelers but he decided to take less money than offered by others to return to Pittsburgh.

Here’s the interesting part on Steelers’ WR JuJu Smith-Schuster’s one-year deal with Pittsburgh: the Ravens made a hard push to sign him and he wound up taking significantly less money to go back to the Steelers, per sources.

JuJu Smith-Schuster also turned down more money on a multi-year deal from the Eagles than he took to return to the Steelers, per source. The Eagles’ were a secret suitor. But Smith-Schuster loved Pittsburgh and its fans too much to leave. https://t.co/X8gitZYxwd

Here are the contract numbers Smith-Schuster was being offered around the league.

Sources tell me these were the other offers

Update: Here’s the statement JuJu Smith-Schuster posted on Twitter after re-signing with the Steelers.

Can’t say it enough, I love you Pittsburgh. Came in here a young 20 year old and you guys embraced me from the moment I got here. So much love. Had my back thru everything, all the struggles and success. So hard to leave. See you this Fall in Heinz WE’RE GOIN CRAZY!!!