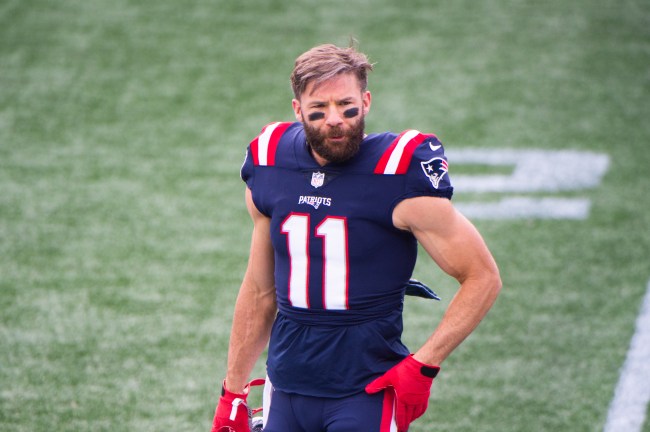 Don’t count on Julian Edelman joining the Tampa Bay Buccaneers any time soon. Based on his comments on Inside The NFL it seems like his relationship with Tom Brady is not in the best place right now.

It’s a surprising development for a pair that seemingly had such a great relationship during their time together in New England. Edelman was one of Brady’s most reliable receivers as a member of the Patriots.

During their time together, Edelman racked up nearly 600 regular season receptions and over 6500 yards. He also won the Super Bowl MVP for the Patriots’ win over the Rams.

Still, Edelman never got the call when Brady started getting the band back together in Tampa and it appears he still hasn’t gotten the call to reunite with his quarterback and Rob Gronkowski.

When he was asked about the Buccaneers’ chances to repeat as Super Bowl champs he gave some interesting insight. First, he pointed to the team’s injuries and stated he thinks they’re too depleted to repeat.

That led to him being asked about joining the Buccaneers receivers. He had this to say;

“Nah, Tom hasn’t called me and in fact, you know … we have a little beef right now.”

I don’t have a clue what he’s saying exactly in that last quote, but I am certainly curious as to what exactly would have cause enough of a rift between Julian Edelman and Brady to get Edelman to bring it up publicly.