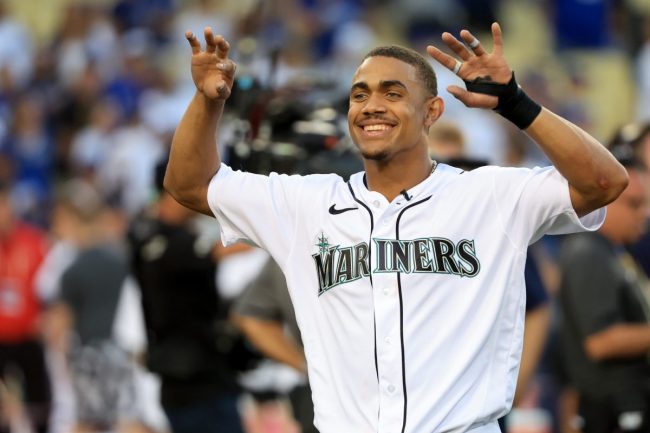 Julio Rodriguez may not have won the HR Derby title on Monday night, but he’ll certainly leave Los Angeles a happy man. The rookie more than doubled his earnings in for the 2022 season, winning $750,000 for finishing runner-up to Juan Soto.

Rodriguez, the No. 6 seed, pulled off upset wins over Corey Seager and two-time defending champ Pete Alonso to advance to the final round. He smashed a first-round high 32 home runs against Seager, and he led all hitters with 81 dingers in the event.

Unfortunately, he fell one home run short in the championship final, although that finish is up for debate.

Still, when all was said and done, the Mariners slugger walked away with a cool $750K.

With this being Rodriguez’s first year at the big-league level, that exceeds his yearly salary for the 2022 MLB season.

That's more than his entire salary ($700K) for this year 😳 pic.twitter.com/wxroMFc6AA

The rookie will make $700,000 in Seattle this season, where he’s performed like an All-Star in his first year with the club. Rodriguez has smacked 16 homers while hitting .275 at the plate. He leads the team in RBIs (52) and stolen bases (21) while fielding at a .992 clip.

He’s been a true five-tool player, and he helped the M’s close out the first half of the season on a 14-game winning streak.

Now, he gets a little something extra for his performance to this point.

Seattle has control of Rodriguez’s contract through the 2025 season, but after the performance we’ve seen thus far, a strong second half could help him to lock up a lucrative second deal sooner rather than later.