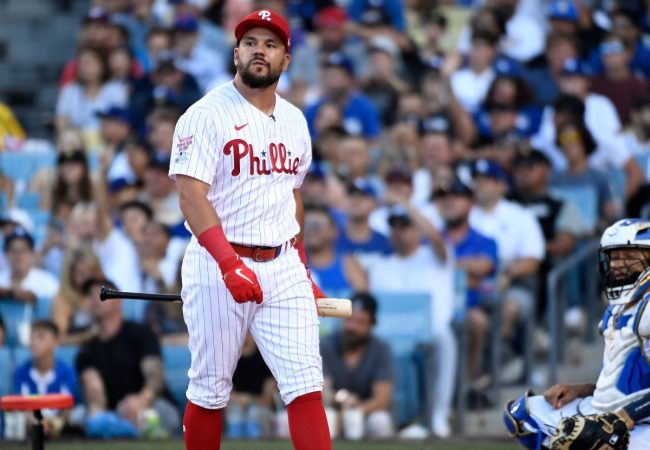 Kyle Schwarber bettors are livid after seeing a potential miscount in the slugger’s HR Derby total Monday night. The lefty was the No. 1 seed in the event, entering the All-Star break with a National League leading 28 homers. He needed to get by No. 8 seed Albert Pujols in the first round of the event.

With the Phillies’ star landing that top overall seed, and seemingly the easiest path to the next round, many sports bettors picked Schwarber to take home the HR Derby title. In fact, he was the second-most bet player in the event behind two-time defending champion Pete Alonso.

So, when he was ousted early by an unassuming veteran, bettors weren’t happy. They became even more disgruntled after seeing that the scorekeepers possibly omitted one of his dingers. Schwarber lost the first-round matchup to Pujols by one home run. Had he been able to tie things up, there would’ve at least been a swing off.

Robbery in the Ravine. pic.twitter.com/luIhUuWiRa

The home run in question is either No. 17 or No. 18. Both appear to go out to right field, though some argue that No. 17 only got to the warning track. Only one dinger gets tacked onto the scoreboard. Schwarber would wind up losing 20-19.

His backers were livid with the end result.

Fans and media were quick to respond to the first-round loss and possible miscount. Take a look at the immediate reaction on social media.

Everyone who had Kyle Schwarber tonight 😓 pic.twitter.com/n1HXy2SZez

People who bet on Kyle Schwarber in the first round 😂😂😂 pic.twitter.com/BRaUEkV809

Kyle Schwarber is about to be public enemy number one.

One bettor lost $54K on the early exit.

Schwarber backers weren’t the only ones unhappy.

Juan Soto advanced to the Finals to face Julio Rodriguez. While he wound up winning the event 19-18, many believe one of Soto’s home runs shouldn’t have counted.

The pitch was not released before the buzzer. It is counted anyway. pic.twitter.com/VGkzU9oyYj

Tough beat, for sure.