Jurgen Klopp Woke Up Legendary Man U Manager Alex Ferguson At 3:30 A.M. To Brag About Winning The Premier League 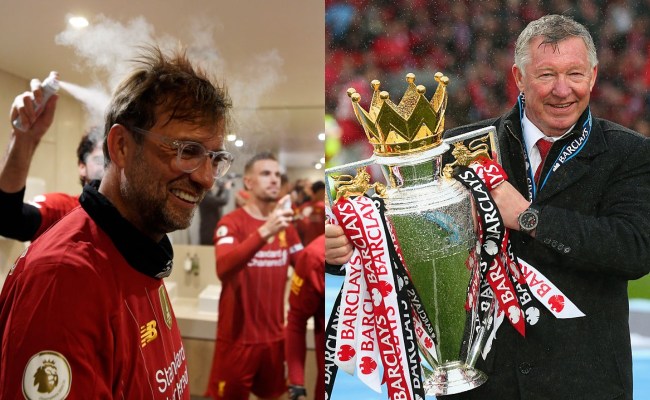 Another day, another anecdote that further grows the legend of Liverpool manager Jurgen Klopp, who is rightfully soaking in all the accolades as he and Liverpool Football Club celebrate their first Premier League title in 30 years.

We don’t cover the Premier League often on this here website — although believe you me, footy fans, I do my damndest — but when we do, it usually involves the gregarious Liverpool manager, who has become such a personality in recent years that even casual American sports fans have heard of him (Steve Kerr citing his quotes in postgame interviews certainly helps).

Ultimately, what makes Jurgen Klopp so likable is his sit-down-and-drink-a-beer-with-ness: he’s the stereotypical definition of a guy you’d love to have a beer with. For someone who’s as wildly successful as he is — just look at Jose Mourinho, for example — Klopp would have an excuse to be arrogant, but every time he speaks, he comes across as the most common-sense-having man working in professional sports today. There’s a common belief, in both England and his homeland of Germany, that if he were to run for major public office, he’d win.

It should come as no surprise then that his response to winning the Premier League has been predictably brilliant (after all, this is a man who once admitted to waking up in the back of a stranger’s pick-up truck after celebrating his first-ever title in the German Bundesliga), even when it comes to playfully rubbing Liverpool’s triumph in the faces of his rivals.

As he was being awarded the LMA Manager of the Year, Klopp received a personalized message from legendary Manchester United manager Sir Alex Ferguson, who the same is awarded after.

In congratulating Jurgen and his team on their incredible season, Ferguson also offered the 53-year-old German some forgiveness for waking up him up at 3:30 in the morning with a (likely) drunken phone call.

Klopp called Fergie at 3.30am to tell him he’d won the league! https://t.co/N0eNISkOEl

Considering that Klopp’s recent trophies have brought Liverpool back above Manchester United as the most successful English football club, it’s surprising that Ferguson took Klopp’s antics so well. Actually, no it’s not — such is the man’s unique cult of personality.