For Liverpool, Destiny Arrived All The Same 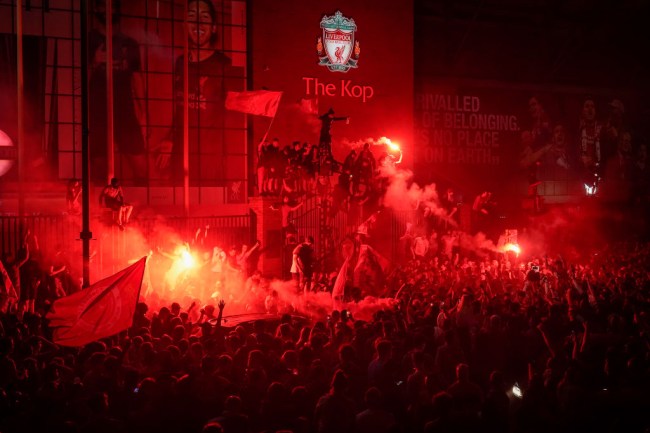 If a tree falls in a forest and no one is around to hear it, does it make a sound? If you win a game in an empty stadium, do the fans still enjoy it? If you win a championship in a broken world, does anyone care?

While the resumption of American team sports — hockey, basketball, baseball, etc. — has been a slow, arduous, two-steps-forward-one-step-back uphill battle, the continent across the pond has generally kicked fully back into gear, as major football leagues in England, Spain, Italy, and Germany (not France, though, as they pulled the plug way too early) are all currently finishing out their 2019-20 seasons behind closed doors, with a multi-national tournament, the Champions League, set to be completed in August

In the month or so since football has resumed, there’ve been ceaseless debates about ancillary elements of sports’ return such as fake crowd noise, newly-implemented water breaks, and, of course, the eerie emptiness of the stadiums themselves. And while those sort of trivial discussions stimulates and temporarily distracts the mind from the harsh realities of our current day, they miss the point entirely of the real issue at hand: does any of this matter?

I’ve been alive for 27 years now, and without a shout of a doubt, these last four or five months have been some of the darkest I’ve ever seen our country live through. I was only eight-years-old when 9/11 happened, so my memories of the following days and weeks are peripheral at best. But what I do remember is an overwhelming sense of national pride, of undying unity. The same cannot be said about today, where it feels as though every latest piece of news is designed by the devil himself to pull us further apart — we’re in the midst of both a historic pandemic and civil rights revolution and they’ve somehow both been politicized. The truth is, even as a Liverpool fan, sports are frankly meaningless right now when contextualized against everything that’s happening on our little blue planet right now. But as Liverpool manager Jurgen Klopp once said, football is perhaps the most important of the least important things, and to some, to many, that’s all we have right now.

More so than any major sport we have here, football is a truly global game: for every Californian tuning in at the crack of dawn, there’s someone on the opposite end of the globe in Singapore or Bangladesh or Tokyo doing the exact same thing in the wee hours of the night. When Mohamed Salah scored his first-ever goal against Manchester United earlier this season, it didn’t matter where in the world you were — all of us, together, knew that was the moment the league was won. I sensed it here in New Jersey just as profoundly as the Anfield faithful felt it in the bowels of the stadium that night — we’re gonna win the league. How do you reckon with millions of people tens of thousands of miles apart from wildly varying corners of the world tapping into the same emotion simultaneously? At what point do sports become something more?

If you win a championship in a broken world, does anyone care? You may not. The world may not. But to those that do, it’s perhaps more meaningful than ever because of the very nature of our reality. Liverpool fans had to wait 30 years to see their beloved club win the Premier League. Then they had to wait three more months — hoping, praying that fate would not forget them in the chaos of the world. And now that it’s finally happened, it’s become ever clear that it didn’t matter when, how, or where it happened for Liverpool and their fans, what matters is that it happened. It may have been destiny delayed, but it was never destiny denied — for Liverpool fans, regardless of this moment in history, what matters is that destiny arrived all the same.

Played soccer my whole life but only began watching in the last few years. Always wanted to delve into the culture but never had a connection.

Then Dad got a job with a Liverpool company and there was no turning back. Haven’t seen him in months but you bet he was my first call🏆 pic.twitter.com/seXmmKWZUW