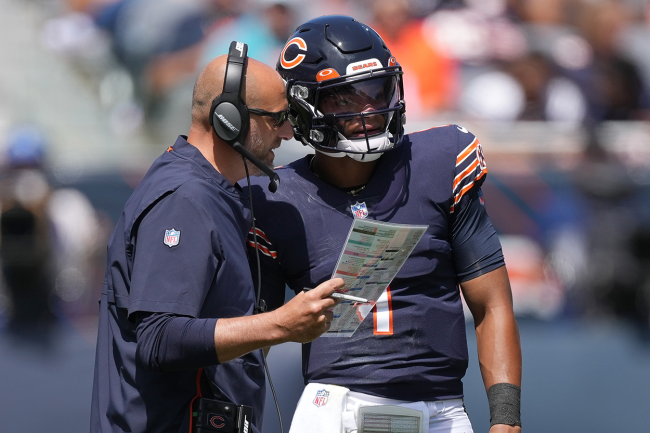 Matt Nagy is no longer the head coach of the Chicago Bears and for good reason. Not only was his team unable to find success under his leadership, but rookie quarterback Justin Fields hated at least one of his game plans.

Ron Veal, a private quarterback coach who has worked with Fields since he was in sixth grade, recently shared that his client and mentee was not thrilled with how things went during his first NFL start. In fact, Nagy’s game plan pissed Fields off.

Veal recently spoke with 670 The Score in Chicago and shared how things went before, during and after the Bears’ ugly 26-6 loss to the Browns. Specifically, he said that the game plan that was installed for Fields’ first start in the NFL left the quarterback extremely frustrated.

“It was bad,” he said. “He took a beating that day. It was kind of crazy and weird at the same time. . . . I know he was a little pissed about it but I didn’t get an explanation. And I really didn’t ask because I know he was in a situation where he was really pissed off about it.”

Obviously, Chicago fired its head coach for a reason.

Nagy is gone now, so Fields doesn’t have to worry about his game plan.

Now, in Fields’ second season, Matt Eberflus is the head coach in Chicago. He has a new staff, but after a disappointing first year, he also has a lot of expectations falling on his shoulders.

Veal said that he and Fields have had worked through several sessions during the offseason that were intended to get him ready for what the new Bears coaches are asking of him. Fields also knows that there are a lot of areas in which he could improve.

“He played well at times and he struggled at times, which is what happens with rookie quarterbacks,” Veal said.

While the Bears are not necessarily Super Bowl contenders in 2022, Fields needs to show improvement. Chicago needs to be better than it was under Nagy and the the former No. 11 overall draft pick needs to be at the forefront of that advancement.