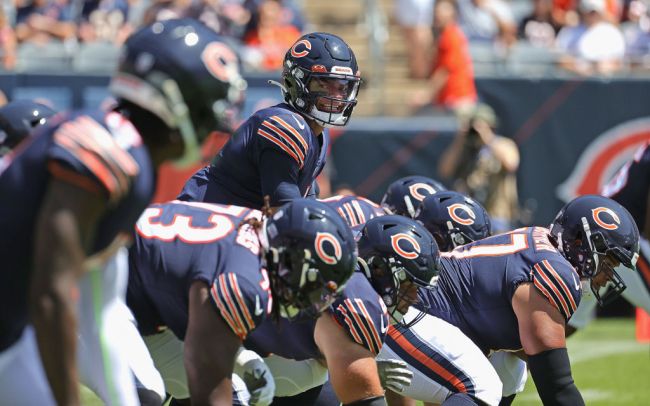 ​Justin Fields’ NFL debut was far from perfect but he showed flashes of greatness and looked like the real deal. The No. 11 overall pick in the 2021 NFL Draft completed 14 of 20 passes for 142 yards and two touchdowns.

During the third quarter of Chicago’s win over Miami, Fields scored his only touchdown through the air. He found a wide open Jesse James for six.

Another TD for the rook! 🐻@justnfields | @ChicagoBears

The play-action touchdown didn’t require all too much effort, as the receiver was all by himself, and Fields knew it was going for six even before the play.

TikTok user @taijackson316 pointed out a moment prior to the snap. As Fields walked up to the line of scrimmage for the soon-to-be touchdown, he cracked a smile like he was certain that the play was going to work.

Fields is an undeniable athlete and showed his ability to dice defenses with both his arm and his feet. However, for him to grow into a legitimate NFL superstar, he will have to become better at being a quarterback instead of an athlete.

The 22-year-old played very well in his first appearance with the Bears, but he will need to become better at reading the defense and deliver the ball on time to receivers. With that being said, it looks like Chicago drafted the player that they expected and the hopes are high.

Fields did not disappoint and continues to makes his case for the starting job over Andy Dalton— especially if he keeps smiling before throwing touchdowns.