Fans Stunned To Learn The Dr. Working On Justin Herbert’s Rib Injury Is Same One Being Sued By Tyrod Taylor For Punctured Lung 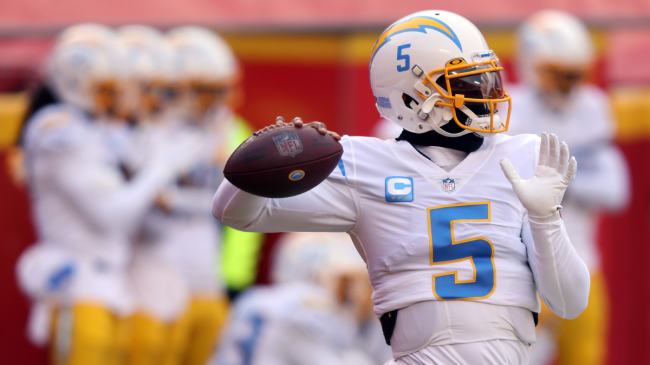 Justin Herbert is battling a rib injury following Thursday night’s contest against the Kansas City Chiefs. In fact, it appears that he’s dealing with fractured rib cartilage, which has led to a day-to-day status on the Los Angeles injury report.

But what fans are now learning is that the doctor tending to Herbert’s setback is the same one that’s being sued by former Chargers’ quarterback Tyrod Taylor. Taylor suffered a rib injury at the start of the 2020 NFL season, but while undergoing treatment, he also suffered a punctured lung.

Here’s more on that situation from NFL insider Adam Schefter.

Moments before the Chargers’ game on Sept. 20, 2020, against the Kansas City Chiefs, Taylor suffered a punctured lung when Gazzaniga attempted to administer a pain-killing injection to his fractured ribs.

Taylor, 33, alleges in the lawsuit that he suffered “severe physical pain resulting in hospitalization, physical therapy, emotional distress and other past pain and suffering.”

Taylor’s attorneys also contend that Gazzaniga’s “negligence, carelessness and other tortious, unlawful and wrong acts … caused [Taylor] to lose position as the starting quarterback for the Los Angeles Chargers for the 2020 season,” just before he was scheduled to become a free agent.”

Taylor would cede the starting job to Herbert after that punctured lung, a role that Herbert has not given up since that 2020 season. Taylor would then move on to play for Houston.

Many are stunned to learn that Dr. Gazzaniga is still working with the team following that incident.

After learning that the same doctor would be working with Justin Herbert through his injury, fans were shocked. Take a look at the immediate reaction on social media.

One fan wrote, “I don’t know why but I just assumed they fired this guy.”

idk why but i just assumed they fired this guy

“Why would they allow him to then oversee Justin?” this fan tweeted to which someone replied, “the literal future of the franchise I might add.”

the literal future of the franchise i might add 💀

they still didn’t hire someone new???