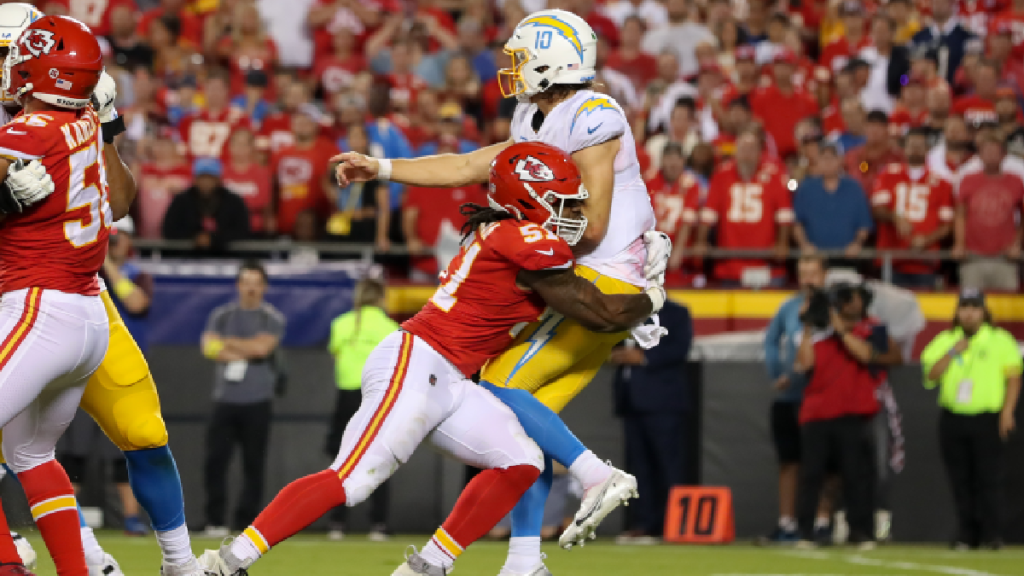 Los Angeles Chargers quarterback Justin Herbert suffered what appeared to be a painful rib injury in the 4th quarter of the Chiefs-Chargers game on Thursday Night Football, the first one streamed on Amazon Prime.

Former Michigan Wolverines and current KC Chiefs defensive end Michael Danna basically got a clear shot at quarterback Justin Herbert who nearly left his feet to get high and throw a pass. This left Herbert’s midsection pretty exposed. And though it was a clean tackle around the waist, Justin came down awkwardly and partially on top of Danna’s helmet on Herbert’s left side.

It was immediately apparent that Herbert had suffered a rib injury and he had to briefly leave the game before returning:

Herbert was evidently hurting so much he couldn’t even walk a few yards to pick up an easy first down and after the game he was visibly hurting as he tried to make his way to the locker room. But in the early hours of Friday morning, an encouraging report came out about Justin Herbert’s injured ribs.

“You’re not going to see a quarterback at any level of football play tougher and do more for their team and will their team to give them a chance more than him. There’s nobody that can do what he can do, nobody. He showed a lot of guts, he showed us what he shows every day, that we’re never out of the fight, and he brought us back and gave us a chance.”

“OK” is a heck of a lot better than what fans expected when they saw Herbert leave the game. More news will come out on Friday about Herbert’s injured ribs but ‘OK’ is pretty encouraging, for now.

As of last night, the initial X-Rays were negative:

From NFL Now on @nflnetwork: #Chargers QB Justin Herbert is going through a series of tests on his ribs today. Last night’s X-rays were negative. pic.twitter.com/ol5C8VAk9a

Some fans are optimistic:

Already looking ahead to Week 3…

At least this game being on a Thursday gives him extra time to get ready for week 3. Jax is up next and they shouldn’t have any issues with them.

It’s hard to imagine the Chargers and Justin Herbert winning a Super Bowl. I’m not gonna lie, I can’t see it.

I 100% believe he will never win a SB with the chargers. He will have to change teams

For more on Herbert’s Thursday Night Football injury, you can click here.