A Piece of Justin Jefferson Is Already Headed To NFL HOF After Monster Performance Vs. Bills 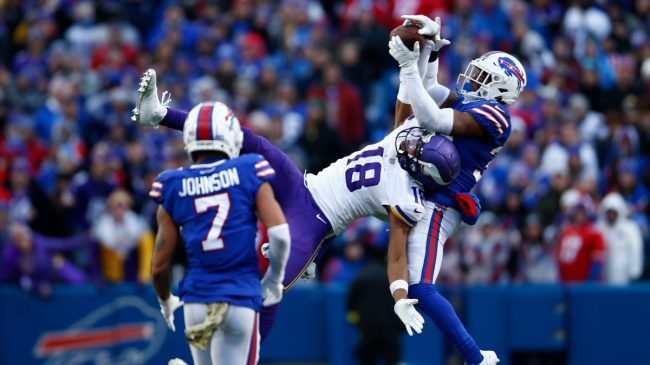 Justin Jefferson went off against the Buffalo Bills as he proved to be one of the best in the game. His career just barely started, but after that performance, the Minnesota Vikings wide receiver is already going into the NFL Hall of Fame.

According to the NFL HOF Twitter account, they’re putting Jefferson’s gloves and arm sleeve he wore during that game into Canton. It was a memorable game, as Justin Jefferson absolutely torched the Bills secondary. But it’s amazing he already has a piece of him going into the Hall of Fame.

🗣New to the Pro Football Hall of Fame

This past weekend, @Vikings wide receiver @JJettas2 made an all-time catch to remember.

The gloves and arm sleeve that Jefferson was wearing have arrived in Canton and will soon be on display at the Hall of Fame.

The Vikings wide receiver is a clear superstar in the league. He’s been a monster so far and there are no signs of him slowing down anytime soon. The fact he’s already in the NFL Hall of Fame is wild. Especially considering he’s only midway through the third year of his career.

He made a highlight play after highlight play in Week 10 and we should expect to see more of it throughout the season. Justin Jefferson is literally a phenom and it’s hard to argue for anyone else being named the best wide receiver in the league.

Look for him to light it up in Week 11, as the Vikings take on the Dallas Cowboys.