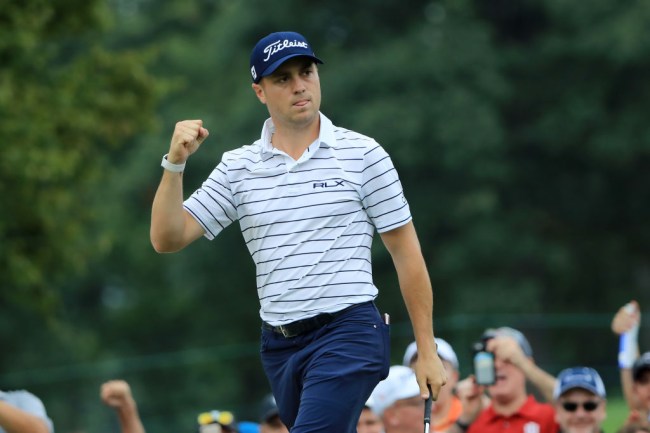 Justin Thomas started the third-round at the BMW Championship two shots off the lead. That my friends will not be the case heading into Sunday’s final-round as he posted a flat-out unbelievable 11-under 61 on Saturday, that even included a bogey, to move to 21-under on the week.

It became pretty clear it was going to be a special day for Thomas as he birdied his first five holes. The putter was of course working, but it was the irons that were the story on Saturday. The longest putt he faced through those first five holes was just 15-feet.

The ball-striking clinic he put on was historic, seriously.

Stripeshow: @JustinThomas34 just posted the best rounds by any player on the @PGATour this season in average proximity to the hole (15'9") and strokes gained approach (6.16).

His first missed green of the day came at the sixth where he picked up his lone bogey on the day, but picked another birdie up at the Par 3 eighth before making the turn at 5-under.

Thomas had 259 yards into the Par 5 10th and decided to hit a 3-wood inside 3-feet for a kick-in eagle to jumpstart his back-nine.

Then things got whacky.

He kept his foot on the gas at the short Par 4 15th but found the water off the tee. He showed off his wedge game again knocking his third shot to 2-feet for the tap-in par to keep the momentum going.

Lightning then struck again at the 16th with his second eagle of the day with a casual hole-out from 180 yards to move to 10-under thru 16 holes.

JT is having a DAY, folks. 10-under thru 16. pic.twitter.com/ZejDiqLpA4

With a boring two-putt par at the last, Thomas finds himself with a six-shot lead heading into Sunday as he’s looking for his first win since the WGC Bridgestone Invitational last August.

Medinah Country Club has been super-soft for the majority of the week and to say guys have been taking advantage would be an understatement.

Adam Scott on low scores at BMW: "If a golf course is soft, we're just going to tear it apart. They just haven't figured out yet that long just means nothing to us. You can't build it long enough."

Jason Kokrak and Thomas both posted 65’s on Thursday tying the course record. Hideki Matsuyama followed that up with a 63 to give him course record honors, but that lasted all of 24 hours thanks to JT’s historic Saturday.

To put things into perspective, Matsuyama started the day with a two-shot lead and carded a one-over 73 on Saturday; he now trails by 10 (!!!) shots. Let that show just how impressive JT’s round was, but the rest of the field took things deep on Saturday as well.