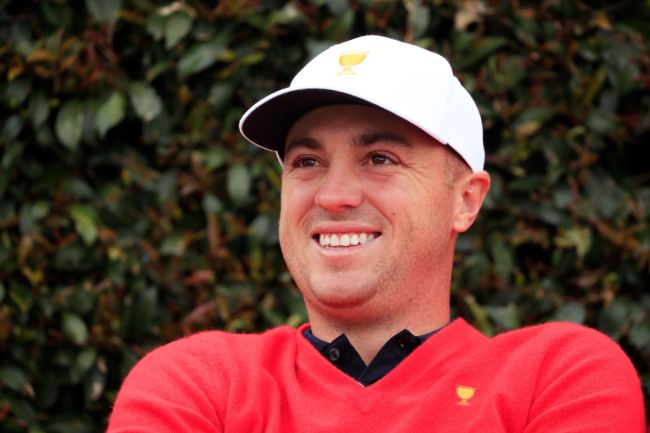 Charlie Woods and Tiger Woods stole the show during last month’s PNC Championship, but it was Justin Thoman and his father, Mike, that took home the hardware. Thomas is good friends with Tiger, and prior to the event explained that he and Charlie have a cool relationship filled with trash-talk, so you best believe JT was going to gloat a bit following the win.

The winners of the PNC Championship receive matching belts and during his press conference on Wednesday ahead of the Sentry Tournament of Champions, Thomas revealed that he and his dad showed off the belts to the Woods during the holidays.

“We have, yes,” Thomas said, according to GOLF. “We had dinner with [Tiger] around the holidays and we both wore our belts over there.

“It was great. We would expect them to do the same thing. And, no, I mean, Charlie just kind of laughed when he saw us and Tiger just said, ‘You know, well done, well played.’ And you know, it was all in good fun. But they fully expected it, I think.”

JT is definitely right, Tiger and Charlie would have 100% been wearing their belts at the dinner if they would have won the event.

Team Thomas won the PNC Championship after firing a final round 57, which was good enough to beat Team Woods by five shots. Tiger and Charlie ended up finishing seventh in the event.

Other than Charlie showing off that he has got some serious game, one of the best moments of the week involved JT, Charlie, and a note he left in a bunker on the Par 4 13th. JT found the fairway bunker off the tee and when he got up to his ball, Charlie left him a note that said ‘draw hole.’ Thomas’ dad left Charlie the same note earlier in the week when he found the fairway bunker after not hitting a draw off the tee.

Charlie Woods left a little note in the bunker for JT. This kid gets it.😂 pic.twitter.com/fLnEw0jlmO