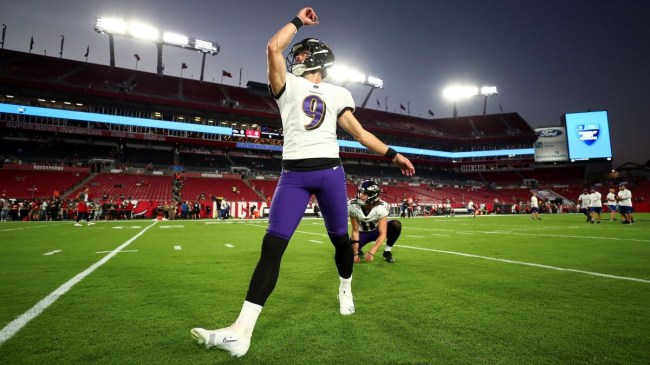 The Baltimore Ravens picked up a big win on the field on Thursday Night Football with a 27-22 victory over the suddenly backsliding Tampa Bay Buccaneers. The win moved Baltimore to 5-3 on the season and they have one of the NFL’s lightest remaining schedulings.

But perhaps the biggest W for the Ravens came off the field.

Baltimore kicker Justin Tucker has been the best placekicker in the league for the better part of a decade. So much so that Tucker is likely a surefire Pro Football Hall of Famer down the line.

But the success also means that Tucker has garnered the respect of his teammates as well as a fair amount of spotlight; He put that spotlight to great use on Thursday night on the team’s flight home from Tampa to Baltimore.

Teammate Marlon Humphrey went live on Instagram during the flight back when he panned to Tucker and asked him to “talk to us a little bit.:”

The result was downright hilarious.

After asking Humphrey “what do you wanna know” he proceeded to take a brutal shot at Denver Broncos quarterback Russell Wilson.

“What are we doing on the plane ride back home,” he asked. “I heard Lamar’s leading us in high knees. Ravens flock, let’s fly!”

The answer was, of course, a sharp jab at Wilson who reportedly spent half the Broncos’ eight-hour flight to London either stretching or working out. Wilson himself said that he was doing high knees in the aisle of the plane while the rest of his teammates were asleep. Surely they didn’t find that annoying.

Most kickers in the league wouldn’t have the platform or the nerve to call out a star QB the way Tucker did. But most kickers aren’t Justin Tucker.

The Ravens are even getting on Russell Wilson, UNLIMITED 😂😂😂 https://t.co/a5KrVyLFjt

The Broncos and Ravens are set to square off on Dec. 4. It now appears that game will have a little more juice than anyone expected.