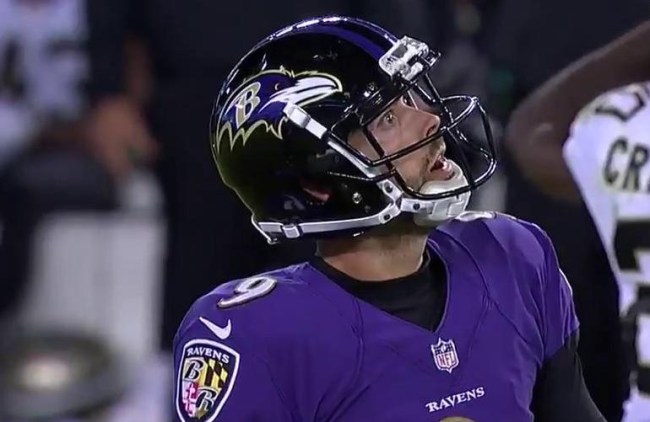 Last night, the Ravens trailed the Saints by a touchdown with the clock showing under 30 seconds left in the game when Joe Flacco decided to flip his Elite Switch to “On” and throw a perfect pass to John Brown to bring the score to 24-23.

At that point, it seemed like a foregone conclusion that the contest would be decided in overtime when Justin Tucker trotted onto the field to even up the score.

Unfortunately, things took a bit of a turn when the ball refused to go home and the Saints secured the win after Tucker’s kick sailed to the right of the post.

The announcer just jinxed the hell out of Justin Tucker! #NOvsBAL pic.twitter.com/U7gA3L25kI

The miss was particularly shocking when you consider Tucker’s track record before he lined up, as he’d never missed an extra point over the course of his career.

Justin Tucker was 222-for-222 on PATs in his career before missing that potential game-tying PAT.

In fact, he’d never even missed a field goal from that distance.

As you can see, Tucker was probably more surprised than anyone else to watch the ball sail past the uprights.

If we learned anything from Ryan Fitzpatrick last month, it’s that NFL fans love nothing more than a good reaction face and they stepped up to the plate in a big way.

"We have food at home, we're not stopping at McDonalds." pic.twitter.com/ywc6Spf74i

happy halloween from justin tucker who has clearly just seen a ghost pic.twitter.com/QRJfiwpT2r

When you overhear someone at a Japanese steakhouse ask for more Ginger sauce instead of “yum, yum” sauce. #JustinTucker pic.twitter.com/0DHg4t9ygR

Justin Tucker did a Dylan from the Chappelle's show after missing that extra point. pic.twitter.com/N6dOo4Aym9

While he could have sequestered himself in the locker room until things had blown over, Tucker proudly strode into the press room after the game to address the miss.

Justin Tucker says he asked to be at the podium after missing the extra-point attempt that sealed the #Ravens’ loss. pic.twitter.com/n1uSo4DPvw

If you play long enough, you’re going to have a kick you want back and tonight was that night for me. Like Joe said, the only thing we can do is just go to work and try to make the best out of a bad situation.

I’d like to thank all of the amazing people on Twitter for managing to do just that.

I don’t know what we’d do without you.