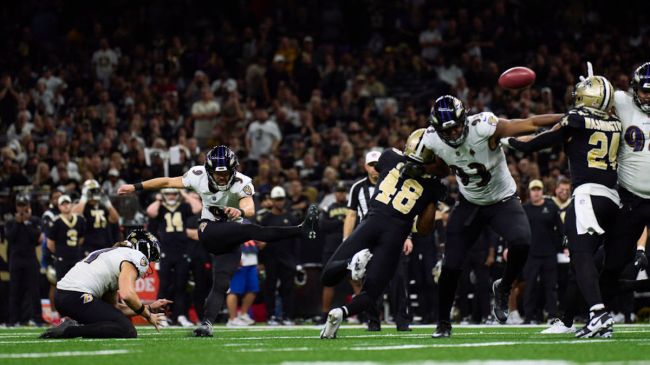 Following the Baltimore Ravens Thursday Night Football win over the Tampa Bay Bucs a few weeks ago, cornerback Marlon Humphrey shared a video of potential future Hall of Fame kicker Justin Tucker clowning on Russell Wilson and his alleged plane ride habits. Given how much the NFL world loves to dunk on Wilson these days — and the inherent hilarity of a KICKER clowning on a Super Bowl-winning quarterback — the video went massively viral.

Then, following the Ravens’ Week 9 Monday Night Football victory over the New Orleans Saints, Humphrey once again posted a video of a swaggering Tucker on social media, who this time took a sly shot at the Saints.

“Marlon, last time you had me on here, I got myself into a little trouble, all right? You’re going to have me mess around and say silly something like ‘Racks on racks, smoking on that Saints pack’ but I don’t want to do that and get myself in trouble,” Tucker joked.

"Smoking on that Saints pack" 💀 @brgridiron

With the win over the Saints, the Ravens have now improved to 6-3 on the season and currently hold a one-game lead over the 5-4 Cincinnati Bengals in the AFC North. The Ravens will now take this 6-3 record into the bye week before they resume their 2022 season at home against the lowly Carolina Panthers on Sunday, November 20.

As for the Saints, the loss has dropped them to 3-6 and puts them in second place in the NFC South behind the Tampa Bay Bucs and Atlanta Falcons, who are tied for first with a 4-5 record. New Orleans will look to turn things around this Sunday when they travel to Pennsylvania to take on the Pittsburgh Steelers.