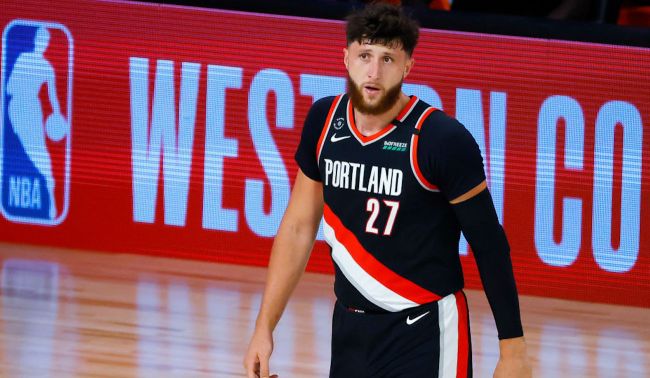 Portland Trailblazers center Jusuf Nurkić was seen on camera confronting a fan face-to-face before tossing his cell phone aside following Sunday night’s game between the Blazers and the Indiana Pacers. The Blazers, who are 12th in the Western Conference standings with just 12 games in the regular season left, lost the game to the Pacers by a score of 129 to 98 to drop their record to 26-44.

The video, which is only a few seconds long, shows a street clothes-wearing Nurkić — who is currently sidelined with plantar fasciitis — approach the Pacers fan following the conclusion of the game. While it’s unclear what the Pacers fan said to the 27-year-old Bosnian center, Nurkić got a few inches away from the fan’s face before grabbing his cell phone and tossing it aside. Nurkić then said something to the fan before a steward at the arena stepped in.

Jusuf Nurkic was NOT happy with what this fan said/did, got in his face, and tossed his phone 😳pic.twitter.com/yboKUzVcL1

This incident involving Nurkić is the latest example of NBA stars taking issue with fans’ behavior, as Los Angeles Lakers point guard Russell Westbrook — who has famously struggled during his first season with LeBron James and co. — confronted a fan who was calling him “Westbrick”.

Kevin Durant also did something similar last week in Brooklyn against the Dallas Mavericks, as he told a fan who yelled “You gotta take this game over” to “shut the f–k up and sit down.”

Fan: “Kevin you gotta take this game over”

Durant: “You gotta shut the fuck up and sit down” pic.twitter.com/lrZro1PWnu

Given the fact that Nurkić makes physical contact with the fan by snatching his property away from him, it’ll be interesting to see how the NBA handles the situation.