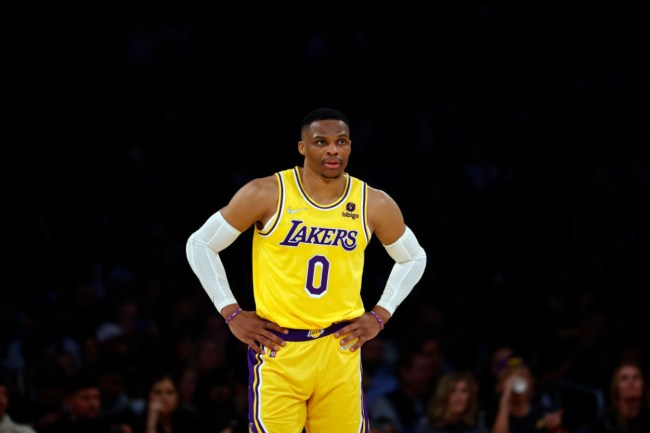 Earlier this month, Russell Westbrook told the media that he doesn’t like when fans call him ‘Westbrick.’ As a result, fans have only been calling him by the nickname even more.

The fact that the Lakers have lost nine of their last 11 games isn’t helping Westbrook’s cause, nor is his inconsistent play.

Speaking of Lakers’ losses, their most recent came at the hands of the Minnesota Timberwolves on Wednesday night. Before the game, a fan decided to film a video of himself shouting “Westbrick, I’m your biggest fan.”

Westbrook heard the fan, and instead of completely ignoring him, he couldn’t help himself from walking over and intimidating the fan asking him “what did you call me?”

The fan was quick to change his tune, but let’s not act like Westbrook was the big winner here.

The fact that Westbrook continues to feed his own trolls makes zero sense. The more he continues to address the ‘Westbrick’ nickname the more he’s going to hear the name.

Sure, it has to get old being called ‘Westbrick,’ but someone needs to tell Westbrook he doesn’t have to confront his haters.

It’s a tough look for Westbrook, as was his airball during the game that Karl Anthony Towns mocked him for.