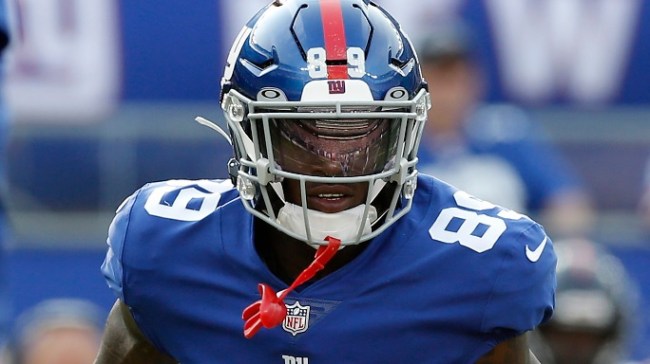 It appears that NY Giants wide receivers are becoming increasingly unhappy with the team’s offense after their latest loss.

On Thursday night, Kenny Golladay could be seen yelling at starting QB Daniel Jones on the sideline.

Now there are reports that rookie wide receiver Kadarius Toney is not happy with how the team is using him.

According to NJ.com, Toney stormed off the field visibly upset during the team’s game against WFT after having a chat with head coach Joe Judge.

Kadarius Toney, a rookie, is already apparently frustrated with his role, and not hiding it either.

From a source: "No use in having a sports car and not driving it.”

My story on Toney, his role and mounting #Giants frustration: https://t.co/KqLRzCjVsA

Kadarius Toney came off the field in the third quarter and Giants coach Joe Judge pulled him aside. Judge spoke to the rookie receiver for about 10 seconds, and then Toney stormed off, visibly upset.

He didn’t yell at anyone, like another Giants receiver, but he was clearly unhappy. It was written on his face. He crossed his arms and stood alone, away from his teammates. He didn’t go back in the game.

The Giants drafted him 20th overall in April, and it doesn’t seem like they’ve figured out how to use him.

“No use in having a sports car and not driving it,” a person familiar with Toney’s thinking told NJ Advance Media.

Toney took to Instagram to apparently express his frustrations with the team’s latest loss.

Kadarius Toney posted this to Instagram. He was visibly upset at one point on the sideline in the second half after speaking with Joe Judge.

Nothing at a Golladay-Jones level, but clearly wasn’t happy. pic.twitter.com/L29NEjdSI6

We’re only two games into the season and the Giants are already falling apart.