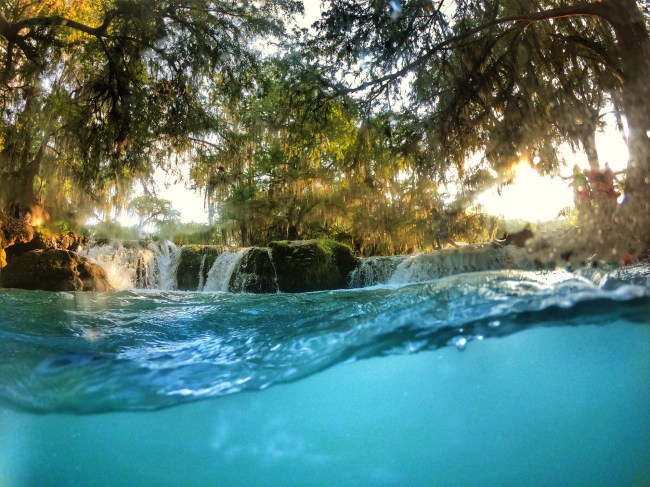 I was scrolling through YouTube and saw ‘kayaker goes over a waterfall and get stuck underwater’ and my first thought was ‘well, yeah, that happens’. It’s extremely common for a kayaker to get flipped over and tossed around while going over a large rapid but the boat almost always works itself out and the kayaker flips himself back over and moves on.

This clip was surprising for several reasons. For starters, that is barely a waterfall. If the drop across the entire river, from left to right, wasn’t so abrupt I’d 100% be inclined to call that a rapid. Alas, I won’t nitpick. But then I clicked play and something surprising happened: the kayaker didn’t just get flipped upside down going over the rapid.

What happened is the kayak goes over the small falls and gets lodged straight down into the bottom of the river/rocks and is stuck there, with the kayaker underwater as all the force of the river rushes over his head. He’s trapped there for a few moments as the others rush to dislodge his kayak and free him from the water.

The video is filmed from a helmet camera on the person who paddles up and pulls the trapped yak’er out of their boat and off to safety. Check it out:

Was his life in danger? Possibly if there wasn’t anyone else there to assist. I think he would’ve been sucked out of the boat shortly by the force of the river and/or the kayak would’ve dislodged itself. The river always has a way of working obstructions out.

This took place in San Luis Potosí, México by the way, for anyone out there thinking of booking a future paddling trip to wherever this is. One of my first thoughts when seeing that river was ‘that looks like a truly pleasant place to do some paddling’. I’m sure you can Google ‘kayaking + San Luis Potosí, México’ and find whoever that tour outfit is.

If you are looking for more kayaking action, check out this clip of the first kayakers to successfully navigate Patagonia’s Triple Crown of Paddling.