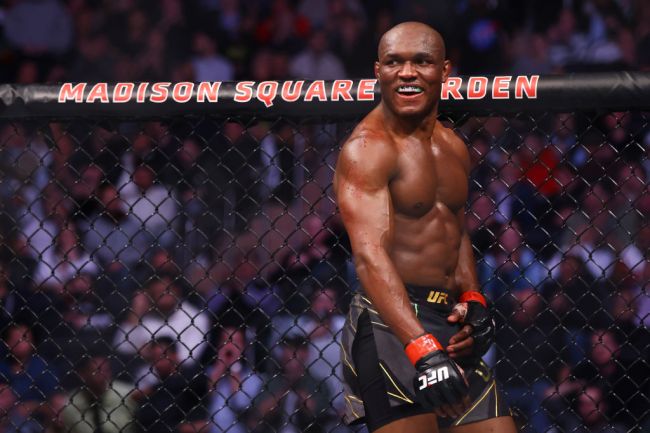 What has almost never happened before, is a UFC fighter dreaming up a superfight that fans hadn’t even considered. However, that’s exactly what Kamaru Usman appears to be doing. Today, he told GQ Sports about a fight that he was interested in and it’s one that would have been a huge surprise for UFC fans.

Usman had his eyes on the former light heavyweight champ 👀 pic.twitter.com/Xtkt98gfin

I can’t even begin to imagine what the fan reaction would have been if this fight were to happen. It’s rare enough to see a UFC champion jump up one weight class. 2 is completely unheard of (and no, Conor McGregor fighting Nate Diaz at 170 doesn’t count).

We actually got to see one UFC champion move up to 205 to take on Jan Blachowicz and it didn’t go well for him. However, given the way Jan struggled on the ground against Glover Teixeira, might at least give Usman’s fans hope he’d have fared better than Israel Adesanya in his big for a second UFC belt.

Usman didn’t mention whether or not he was still interested in becoming the first UFC champ to move up 2 weight classes to win a second belt. It would still be intriguing to watch him take on the winner of Glover Teixeira’s title defense against Jiri Prochazka.

It seems likely that we’d see him make an attempt at a second belt at some point in his career. He doesn’t have much left to prove at his own weight class if he can get past Leon Edwards.

Hopefully he keeps that same level of ambition when it comes time to move up.