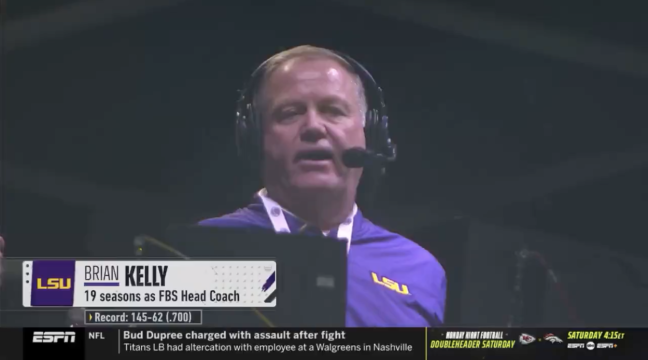 Sometimes — scratch that — most times, the funniest moments in life are the most simple. Whether that be a joke or a chirp, a good one-liner typically plays more often and better than an elongated punchline.

The Wildcats took on LSU in the Texas Bowl and put a beatdown on a very, very depleted roster.

Not only did the Tigers have only 39 scholarship players available due to transfer, injury or COVID-19, but they did not have a single quarterback and played a former wide receiver at the position. Interim head coach Brad Davis, who was making history by leading the program, did his best to keep things close but simply couldn’t overcome the uphill climb.

Meanwhile, new head coach Brian Kelly was in a box somewhere in NRG Stadium. He joined the ESPN broadcast booth during the second quarter and offered a completely false statement about people from Boston and their accents.

The comments came in reference to Kelly’s fake southern accent from earlier in the year. During his first public appearance with the Tigers, the 60-year-old Bay Stater broke out a bizarre, completely phoney twang.

The false accent was most prominent when he said the word “family” but dragged it out to three syllables. It was hilarious.

Thus, on Tuesday, one Kansas State fan used the art of simplicity to troll Kelly and LSU with a simple sign with only one word written out in sharpie. It was also hilarious

Also, shoutout to those suspenders.