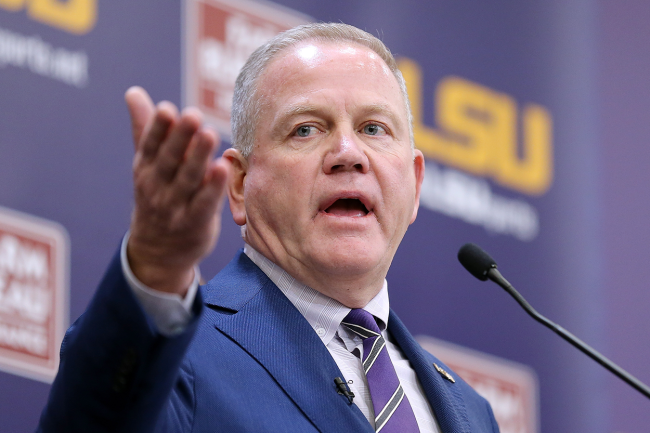 Brian Kelly’s first 14 days as head coach of LSU have been chaotic. His tenure started out with him leaving Notre Dame in a hurry and upsetting those he left behind, he then went on to fake a southern accent at his first public appearance in Baton Rouge and dance very awkwardly to celebrate a five-star commitment.

Kelly was first roasted for his pronunciation of “family” a few weeks ago. During his appearance at the LSU basketball game, where he bizarrely broke into a southern twang, he said “faaamily,” as if he grew up in the deep south and has never been above the Mason-Dixon line.

Eight days later, Kelly stopped by New Orleans to speak to a room of coaches at the The Louisiana High School Coaches Association clinic and spoke about “family.” During his speech, he seemed to have lost his southern accent, but said the word “family” a lot.

Listen to him talking about “family” in this clip from his speech:

At this point, I don't know if BK is trolling us or just really likes #family #LSU

Notice that his twang had mysteriously disappeared when he said “family” and that his semi-Massachusetts pronunciation had returned. Also notice how many times he said “family.”

Later in the speech, when he was not talking about “family,” Kelly had his yankee show. He pronounced Lafayette like La-fah-yette, instead of Laugh-e-yette.

But at least he took a second to stop talking about “family.”

Kelly, from a “family” in one of the most Massachusetts places in Massachusetts, does not fit well with Baton Rouge. That’s okay. He’s a good coach who wins football games and loves his “family.”

However, he is giving off a sense that he is trying too hard to fit in to what he thinks the South is and he’s dragging his “family” into it.