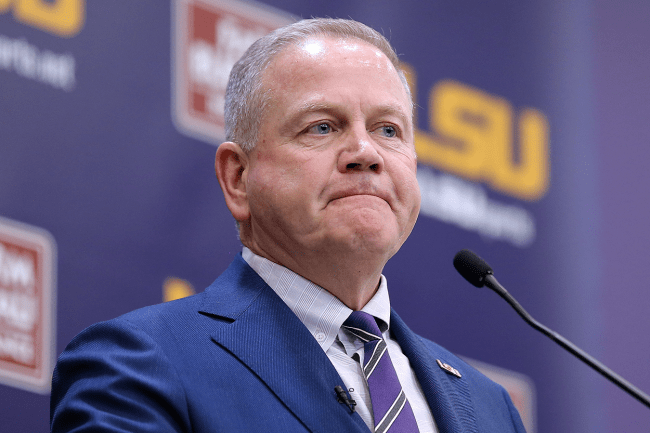 Brian Kelly is a good football coach. There is no denying the facts. He is 263–96–2 all-time. However, beyond his on-field results, he does not appear to be particularly well-liked.

And it makes sense. Especially after the story about Kelly making now-NFL head coaches Robert Saleh and Matt LaFleur shovel snow at a party that he invited them to while they were grad assistants at Central Michigan.

Kelly, who accepted the LSU job on Monday, told Notre Dame that he was leaving on Tuesday morning. He called a 7:00am ET meeting, addressed his then-former team for less than five minutes, and was on his way out by 7:11am.

This is where the picture starts to become clear.

After having leaving them on read, Kelly had the audacity to ask those same coaches to join his new staff in Baton Rouge.

Kelly has struggled mightily to get any of his former Fighting Irish assistants to follow him to LSU. He has been turned down by multiple Notre Dame assistant coaches despite reportedly making them significant offers to try and lure them away from South Bend.

Defensive coordinator Marcus Freeman was named the new head coach of Notre Dame on Friday. He addressed his team shortly after the announcement was made official and the players went nuts.

Both Kelly’s offensive and defensive coordinators are staying in Indiana and they are not the only ones. Defensive line coach Mike Elston also turned down the chance to join his former head coach in Louisiana.

Love this!!! It is Why WE WORK to train our craft every drill, every day!! #BAM⚡️

“The fight is won or lost far away from the witnesses, behind the lines, in the gym..long before I dance under those lights” -Ali pic.twitter.com/gpfIKtqNYm

As of Dec. 3, director of football administration Beth Rex is the only notable name to leave Notre Dame and join Kelly at LSU. That speaks wonders about Kelly’s rapport amongst his assistants.

Nobody wants to join him at LSU. Not even for more money. They would rather stay in South Bend for less money than coach under Kelly.

That’s a tough look. As Kelly’s staff continues to implode around him, the internet has had a field day. Reactions to the news surrounding the LSU assistant pool are hilarious.

Here are some of the best:

Brian Kelly looking at all his assistants he’s bringing to LSU. pic.twitter.com/hk9dV5eEmF

They definitely got a group chat behind his back this whole time lmao.

My face when all of Kelly’s assistant coaches decided to stay at Notre Dame and chase a Natty 🤩🤩 #FreemanEra #FBrianKelly pic.twitter.com/OAjHGY230i

High-level coaching changes are always awkward. But Kelly’s transition has gone worse than most and it is no surprise.

On the other hand, the vast majority of Lincoln Riley’s staff followed him to USC. There was zero hesitation. That speaks wonders about Riley as a person, as it does Kelly.

Kelly has managed, in four days, to alienate a lot of people at Notre Dame. Surely, he will get a strong staff around him. It’s LSU and they have a lot of money.

And, reportedly, he has already retained two prominent LSU assistants. But that doesn’t mean that the way this has gone isn’t unprecedentedly awkward.

Perhaps Kelly will reconsider the way he treats assistants. Maybe, just maybe, he won’t have them shovel snow at a party moving forward— or whatever the Louisiana equivalent might be.