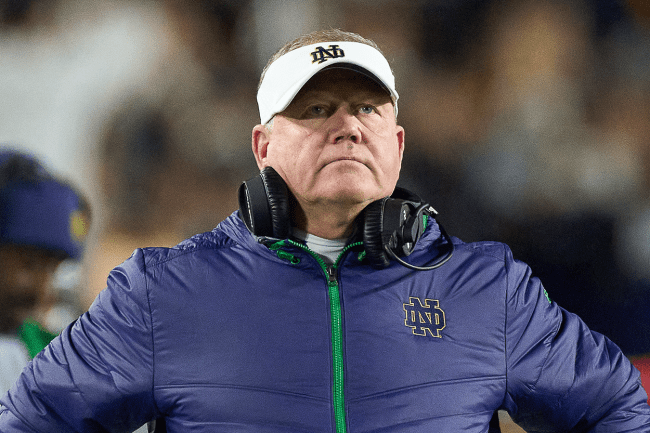 Brian Kelly’s exit from Notre Dame was anything but graceful. The 60-year-old head coach of Louisiana State football accepted the job on Monday. He spoke with his team for less than five minutes on Tuesday.

Kelly, reportedly ghosted his players and assistants on Monday and sent a bizarre, long-winded text to the team late that night. In the text, he set a meeting for 7:00am.

When Tuesday morning rolled around, Kelly stood in front of his team and did not have much to say. Now, to his credit, there is no point in belaboring the breakup. Rip the band aid, as they say.

However, the timeline in which things unfolded was unprecedented. Kelly addressed his team for four minutes and 18 seconds, and then got in his car and pulled away before the clock his 7:11am.

Video has leaked from Kelly’s meeting and there is a lot to unpack.

It started with Notre Dame athletic director Jack Swarbrick, who turned it over to Kelly.

“Morning guys,” Kelly begins. “Thanks for getting up here on short notice, as you know I sent out a text last night, trying to give you as much notice as possible, given the circumstances that happened relative to social media.”

Kelly sent his text hours after the news broke about his leaving so, there’s that. Later in the video, he pulls the old “it’s not you, it’s me.”

“Many times look for a reason to blame, or if there was a reason for something,” he said. “There was nothing here but first class in everything that Notre Dame has done for me and my family.”

And then he goes on to talk about “another opportunity.” What he really means is that LSU broke the bank for him to coach in the SEC.

“It was time in my life for another challenge,” Kelly continues. “I saw that opportunity in a very short window and felt like it was best for me and my family to pursue a new challenge.”

Again, he then goes on to say that there is nobody to blame and nobody that did anything wrong. Kelly finishes it out by saying that he believes that Notre Dame is a Top 4 team in the country and hopes that they will play in the National Championship— EVEN THOUGH HE ABANDONED THEM!

You can hear the full audio here: