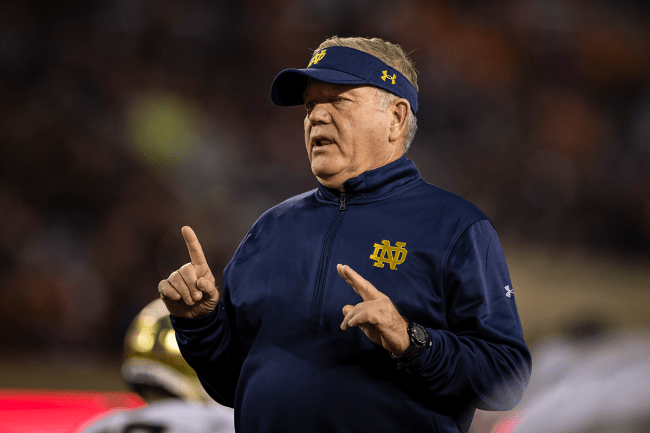 Brian Kelly is off to Louisiana. The 60-year-old head football coach will land in Baton Rouge at 2:30pm CT after accepting the LSU job on Monday. Per reports, he got up and out of South Bend as quickly as possible on Tuesday morning.

Kelly, who was working out the details with the Tigers’ athletic department on Monday, was not in Indiana. When the news broke on Monday evening, he reportedly ghosted his entire staff and everyone at Notre Dame. Not long thereafter, he sent a hilariously lengthy ramble of a breakup text to his entire team and assistants.

In the text, he scheduled a meeting for 7:00am. Players and coaches were forced to gather, on what is typically a slow week to rest and recover before gearing up for a bowl game, before the sun came up. And now, per reports, the meeting didn’t even last two minutes.

Multiple sources indicated that Brian Kelly’s address to the team on Tuesday morning lasted less than two minutes, then he turned around and walked out. He did not take questions from the players.

Here is the timeline:

As players were leaving the facilities and heading back to their respective housing to digest what just went down, the sun started to rise. Meanwhile, Kelly was already packing his things, gathering his family and on his way to the SEC.

If the meeting started at 7, looks like it didn’t last longer than 15 minutes.

The quick turnaround for a coach to join his new school is not unprecedented. With the increasing value of Early Signing Day coming up in just a couple of weeks, Kelly needs to get on to his next job. And he isn’t going to belabor the point.

However, in this case, it was a literal Irish goodbye.

Kelly did not tell his players or coaches he was leaving, the team found out through social media, he offered them a strange breakup text, made them get up before the sun, and then left them in under 10 minutes.

Considering that Notre Dame has a legitimate shot at a New Year’s Six Bowl and a longer shot at the College Football Playoff, that is unprecedented. In the blink of an eye, Kelly was gone. Just like that. Poof.