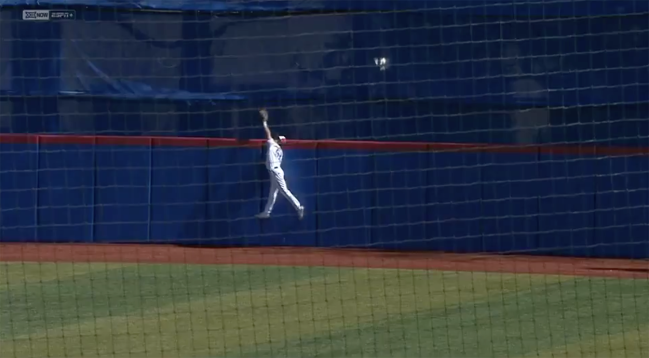 Kansas baseball is six games below .500, but they stole a game from No. 4 Texas Tech over the weekend. Despite the Sunday win to avoid getting swept, the Jayhawks got pummeled by the Red Raiders on Saturday and lost 2-28.

However, it should have been 2-29. A wild situation unfolded in the seventh inning that took a run off of the board for Texas Tech.

In the top half of the inning with nobody on and no one out, Red Raiders outfielder Sam Hunt crushed a home run to centerfield. It was a bomb.

On the defensive end, Kansas centerfielder Sergio Rivera went up and made a phenomenal home run-robbing catch. Or so it appeared.

Rivera came within inches of snagging the deep shot and came down as if he had made the catch. Everyone in the stadium, including the broadcast announcers thought that he had kept the run off of the board.

He did not. Rivera did not make the catch, but he sold the heck out of it and made it look like he did.

As a result, Hunt did not even attempt to run the bases. He walked back into the dugout because he thought that he was out, when in reality, he hit a home run.

Because Hunt did not round the bases or touch home plate, he was called out and the home run didn’t count. It was wild.

Everyone thought this center fielder robbed a home run, including the hitter who was called out because he never rounded the bases pic.twitter.com/INEfx4DtiB

Ultimately, it didn’t matter because Texas Tech was mashing. Either way, it was a wild scene that you likely will never see again.